In my father's day 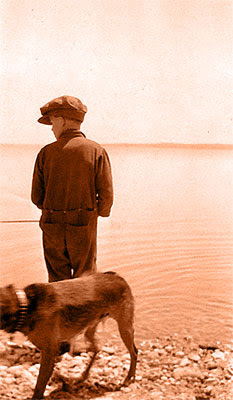 It has become a tradition of sorts for me to write about my father on Father's Day. He has been dead for about 15 years now, but he still shows up in my dreams now and then. I also see him more and more when I look in the mirror.

My father was born in Portland, Oregon in 1915. He was in an orphanage until he was five years old before my grandparents adopted him and took him to live at a vacation camp resort they owned on the Oregon Coast. It was at Neah-kah-nie Beach near Nehalem, Oregon. You can't see it very well, but I believe that is my grandmother on the far left in the photo below. 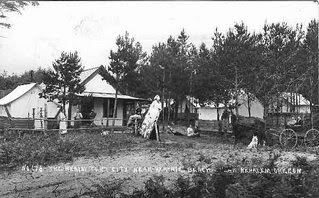 I don't know the reason, but my grandparents sold the H**** Tent City and moved to Boise, Idaho in about 1925 or so. I often wonder what it would have been like if they'd held onto that property on the Oregon Coast and I'd grown up near the ocean. I definitely would have had a better view growing up and the potential for inheriting a fortune. But then again I probably wouldn't have been me then, so it is a moot point. 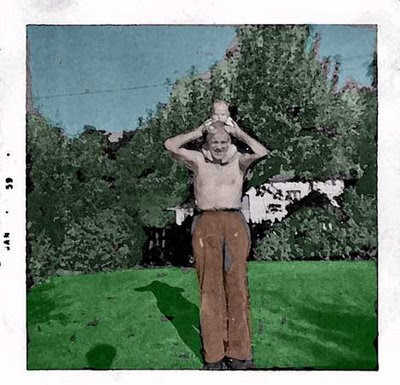 The photo above is the way I always remember my father. He rarely wore a shirt during the summer, but always had on long work pants covered with a paint stains. My father never cared about how he looked despite my mother's many attempts to get him to.

My father loved the outdoors. His favorite thing was to be in the mountains standing in the Boise River with a fishing rod in his hand. We scattered his cremated remains next to that river and I knew at the time he appreciated the release.

It surprises me at times how different I am than my father. I hate fishing. I would rather stay in a hotel than sleep in a sleeping bag. And I refuse to walk around without a shirt.

But then again I still feel his influence in my character. It is impossible for me to litter. I can build and start a fire with one match. I love reading (my father would take me to the library almost every weekend). I mow the lawn in an inherited pattern and I don't mind washing dishes. I also am honest and loyal to a fault.

These things come from my father.Thanks for the gifts dad. Even on Father's Day you keep giving.

It made me smile, my thoughts are my own on this occasion my friend.
I am like my father, but I'd rather not be. You enjoy what you have my friend, just enjoy!

What a lovely tribute to your Father.

Happy Father's Day to you as well Tim! :)

I wish I could find a word - a word that would sum up the brilliance of this post. You have a unique way of weaving tidbits of your past into how they translate into your present. I think you have a gift for humor, but when you write about your more serious thoughts - your true writing talent emerges. It is also a great honor to get to know pieces of you through the verbal and visual images you release through your writing....all those trips to the library paid off.

I know you continue to make your Father proud.

Thanks Blazngfyre,
I appreciate it.

And thank you Miss Bliss,
I'd like to think my father is proud.

Very nice post. And I'm jealous that you inherited a law mowing pattern. Not everyone can say that, you know.

Thanks Kristy,
Unfortunately when I mowed the law, the law won.