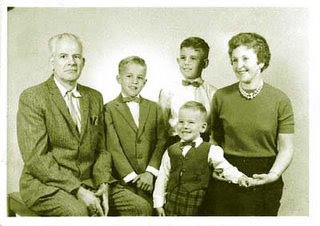 I saw an ad on the side of the bus last week for a local casino. It said, "THE QCC CASINO TREATS ME LIKE FAMILY." I started laughing when I thought about it. I know the copywriter meant it as a good thing. But it is kind of a loaded statement.

My family isn't close. I see my middle brother and his family once a year at Thanksgiving. I see my mother then, too. I call her ever couple of months. I rarely see my oldest brother. I maintain contact with his son, my nephew, through my blog.

It isn't that I don't care about my family. But for some reason we weren't raised with a sense of family. My father was adopted and was raised as an only child. My mother came from a family of 13 children. The opposite extremes left both of them without any real idea of what a family was.

Like everyone else raised in the 60s and 70s, I watched ideal families on television that enjoyed spending time together and went out of their way to help each other. There was Father Knows Best, My Three Sons, The Brady Bunch and Ozzie and Harriet. Father's advised, mother's nurtured and siblings talked. Ironically, today's behind the scenes nostalgia shows debunk any myths that may have been behind all of those shows.

I assume there are traditional families out there. But I think the way I was raised was pretty typical. Everyone did there own thing. My parents struggled just to pay bills. Their roles as providers didn't leave much time for being counselors and mentors. No one really talked. I was much older before I really sat down and had a conversation with my brothers. But we still didn't really talk. My father died before I could ask him who he really was. And now my mother is in her 80s and her main topic of conversation is what she had for lunch.

So ironically when I see an ad where they say a business treats you like family, I think they are inadvertently being honest. It means they treat you politely but you are still a stranger with a credit card. 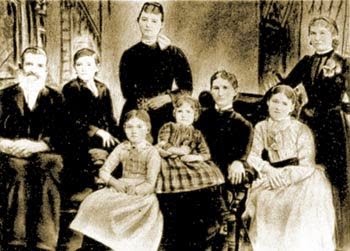 I have to agree with you Tim. I come from a big sprawling family that isn't close at all. In fact my siblings all live in different states and we keep in touch mostly through e-mail. My relationship with my own kids is quite different. They hang out together as well as with me...a little closer to the Brady Bunch.

So you are part of the Brady Bunch. Does that make you Florence Henderson? :)

When I think about my family I'm not sure I would want to visit these establishments that say they "treat you like family!" Oh great - does that mean I walk in and my mother is there to make me feel like shit??
Not the best marketing ploy! Oy vey, JP

So they're a bunch of depressed and repressed, angry alcoholics too, huh?

I'm closer to my SIL than I am my brother or my father.
We just don't communicate well.
Unless we're drunk of course.

A casino treats you like family? Does this mean that if you are making particularly stupid bets and losing a lot that they will advise you to stop betting and seek treatment?

My Mother and most of my 8 siblings live in different parts of the country as well, but somehow we manage to still live on top of each other. We are all on myspace (my youngest sister campaigned for us to all get accounts) and exchange daily comments and pictures.

I don't want any business to treat me like family. If that were the case, the business would fart and blame it on me.

JP,
I also cringe when I see a restaurant that offers "family-style" dining. That has chaos and screaming written all over it.

Blaznfyre, More like republicans and born agains, but they are still family.

Lights,
They will also make fun of the car you drove in on, the shirt you are wearing and your haircut. Then they will engage you in a political discussion on the merits of the current administration. Wait a minute, I think I'm talking about Thanksgiving now.

Miss Bliss,
You haven't been in a casino recently, have you?

And then R goes and marries into the family that gets together once a month minimum......

His side is a different sort of family style than I grew up with.

K.
That is good for him. I honestly don't think anyone on his side of the family intended to be that way. We just didn't really know any better for the longest time.