The bearable likeness of being 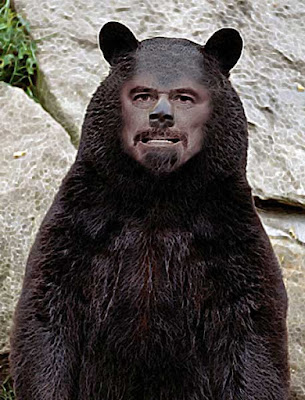 I'm going to ask you to bear with me now as I launch off on another series of me Photoshopping my face on things. It amuses me if no one else. Actually my 19-month old daughter seems to be getting a kick out of it. Every now and then she toddles by, points at the screen and says, "Da Da!" I love how she just accepts it as me and doesn't judge.

We all could learn a lot from toddlers. Well, except for attention spans. They pretty much don't have any. But that does make them a perfect focus group for what works on the Web.

I think if there was a Guinness record for Photoshopping your face on things I'd have it hands down. I pretty much will try to Photoshop my face on anything. I am willing to bet I am the only one who has ever Photoshopped their face on whale vomit. There is a certain distinction in that. The only thing that has really stumped me so far is trying to Photoshop my face on an elephant. Some day I'll figure that out, too.

I don't apologize for grafting my face to things. It is a harmless diversion. Though one person did get pretty ticked off when I put my face on a Picasso painting. They seemed to think I was defacing fine art. I actually thought I was making them my own. Regardless, I didn't feel bad that the person was offended. I was more offended that they were offended. I was nice about it at the time. I shrugged when I really wanted to flip them the virtual finger and tell them to go darken the towels at someone else's blog.

That person eventually stopped dropping by anyway. Most people do. I suppose there is only so much interest anyone can have in a blog essentially dedicated to Photoshopping the blogger's face on things. Though I like to think I slip in a little philosophy and off color humor in there now and then to spice things up.

Wait, I just told my daughter to take the Swiffer Dust Wand she is running around with and dust the cat. I want to see how it plays out. Just a second. I'll be right back.

Okay, that wasn't quite the good idea I thought it was. Oh well, we have other cats. Anyway, as I was saying, it is hard to maintain a high interest level on any blog unless you mix things up now and then. That's why I go back and forth between nasty rants, heart tugging reminiscences about my childhood and just plain old brain farts. Rest assured that the one thing that remains consistent about my blog is my face. Somethings may not be pretty but they bear repeating.
Posted by Time at 5:15 PM

Here's a photoshop challenge for you:

My personal all time favourite was the echidna. Brilliant.

Gypsy,
Yes, not too many people remember the echidna (or know what the hell they are).

Well, we have an unfinished basement but we do have a finished ceiling. Michelangelo could do it justice. (ha)

I know it's simple to swap heads, but it's still disturbingly amusing. :)

(or perhaps I'm just hopped up on the cleaning supplies)

ah well. at least you didn't grin and bare it. that would be a new twist for this blog. (no, that was neither a challenge nor a dare.)

Well, you should know that my personal favorite was "Dirty Doughnuts" where you did sortof "grin and bare it". Though, it wasn't yours to bare.

Hey! I really enjoy seeing what you will do next. Yeah, I know, I haven't been around much but... no excuses. Photoshop on...

Dirty Doughnuts is about as close to me exposing the bare necessities as I'm ever going to get. :)

Kindness! Good to hear from you! I assumed you had been in hibernation. :) Welcome back!

Please don't ever stop photoshopping your mug on whatever strikes your fancy. No matter what's going on in Dizgraceland, it's the one thing we can count on! JP/deb