Making a Pope out of myself 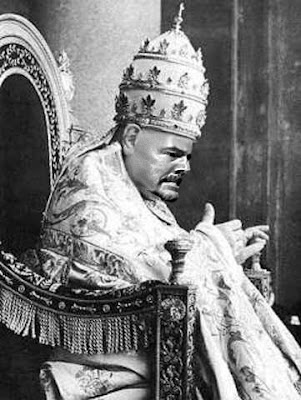 This photo is not unlike my previous photo. For some reason I am reminded of the Coneheads. I have to admit the coolest thing about being the Pope would be to wear all of those funky hats.

But back to making myself the Pope. This is not something I would be allowed to do if I was paid to create this crap. Everyone I worked for would panic thinking somehow they'd be blamed for Tim being too colorful. That could lead to lawsuits and firings. The Vatican has a bigger legal department than Elvis Presley Enterprises. So at some level my judgement would be overturned by some one's act of self preservation and I'd be forced to post a photo of me as a bunny or something less controversial.

Which is just one more reason I'm glad I'm not wildly popular. Even if you are just standing on a dung heap, someone is bound to be pissed because you have a better view of the swamp.

Note to self: Start keeping a list of your original colloquialisms for submission to a publisher. Perhaps working title should be the Idiot's Guide to Colloquialisms.

Note to self: I can't believe I spelled colloquialism correctly without running a spell check.

Back to talking to you (whoever you are):

It is not that I don't have limits. Even I think some things are beyond good taste. I can't think of one right off the top of my head, but I'm sure I'd know it if I said or did it. I happen to think most of what Howard Stern (the radio shock jock not Anna Nicole Smith's lawyer) says and does is in remarkably bad taste. Degrading people isn't funny, it just illustrates you have pretty low self-esteem. Personally I've always thought Howard Stern looks like a drag queen doing a bad impersonation of Cher.

I suppose there is a fine line between making fun of someone and pointing out the obvious. George W. Bush is a perfect example. Even late night talk show hosts have given up trying to make fun of him. It's like pointing out the village idiot every day. It may be funny the first time, but then it is just sad.

But generally I've found, you can find offense in anything if you look hard enough. Any presidential candidate can tell you that. If people spent as much time looking for good in things as they do for reasons to feel offended, everyone would be happy.

If I really was the Pope I'd issue one of those Holy Writs (or whatever they call them) making it so.

Note to self: I think I've discovered another one of my limits of good taste.
Posted by Time at 10:37 AM

The trouble with people these days is they have lost their sense of humour. That's why so many people can find offense in the completely inoffensive. It's an astonishing talent actually worthy of admiration or it would be if it weren't so bloody annoying.

I think that hat suits you very well and that advertising copy for "Holy Grits" would strike fear in the heart of anyone's constitution :)