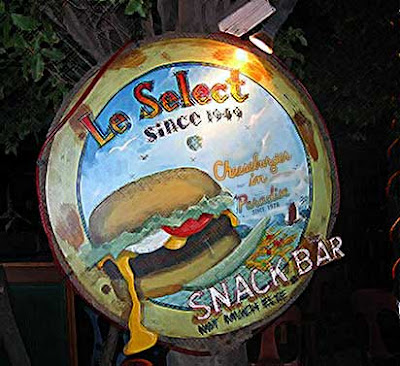 I was listening to one of my play lists on my iPod the other day on the train ride home and Jimmy Buffett's song Cheeseburger in Paradise came on. For a couple of minutes I was transported back to 1995 and my first cruise on a Windjammer Barefoot Cruise in the French West Indies. One of the stops on that cruise aboard the 248-foot schooner the Polynesia was St. Barts (St. Barths, St. Barthelemy or however you want to refer to it). And St. Barts is home to Le Select Bar, the place Jimmy Buffett supposedly was thinking about when he wrote Cheeseburger in Paradise. 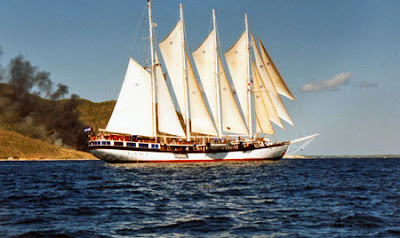 I'd discovered Windjammer Barefoot Cruises at a Travel Show in Seattle. I was about to turn 37 and hadn't really travelled much. I'd kept waiting, thinking I would someday meet someone who I could travel with. But as I headed down the hill towards 40 I began to realize that if I was going to travel I'd better bite the bullet and go by myself or I would never see the world.

The Windjammer Barefoot Cruise brochure caught my attention because it offered week long cruises on old sailing ships rescued from oblivion and retrofitted to house no more than 120 or so passengers and crew. They sailed to smaller islands in the Caribbean that weren't necessarily accessible to the larger cruise ships. Oh and they attracted a higher percentage of singles.

I booked my cruise to sail the day after my 37th birthday. The 7-day cruise left from St. Martin and sailed to Montserrat, Nevis/St. Kitts, St. Barts and a little island inhabited by goats that I don't even think had a name. I paid a premium to have a cabin by myself. And I'm glad I did because the cabins were the size of a college dorm room and had two bunks, no porthole and a traditional sailing ship bathroom (as one guy on the ship put it, you could sit on the toilet, brushing your teeth and take a shower at the same time).

Small though it was, having my own cabin was far cry from the "bachelor" cabins that housed eight people with a shared bathroom. Needless to say, most of the people in those cabins were sleeping on the main deck by the second night of the cruise.

I won't go into a day by day travelogue about the rest of the cruise. Suffice to say, that vacation was as close to perfect as I'd ever found. There is something about traveling alone that forces you to discover strength and confidence you never knew you had. I went mountain biking on Monserrat and visited Alexander Hamilton's birthplace on Nevis. And can't even describe what it feels like to be awake at 2 a.m. under a clear Caribbean sky with the spice scents of the French West Indies wafting over you in the gentle warm breezes. 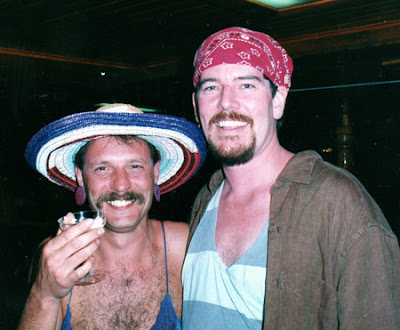 During the cruise I made friends many of the people on the cruise ship. There was Bill, an oil refinery worker from Chicago; Franz, a surgeon from Berlin (pictured above in drag at the PPP [you had to dress as a pirate, a prostitute or a priest) party the third night aboard); a couple of surgical nurses from Detroit and a teacher and a bartender from Rochester, New York.

And there was of course, my own cheeseburger in paradise. St. Barts was almost at the end of the cruise. A group of us spent the day driving around the island in a Suzuki Samurai and hanging out at the beaches.

That night we tendered in from the ship and walked by docks of yachts bigger than most people's houses. And we gathered at Le Select on the patio watching a French fry cook with dreadlocks grill burgers to a reggae beat squinting from the heat and the smoke from the cigarette hanging precariously from his lips. Between the bottles of Red Stripe and Carib beer, and the greasy cheeseburgers with fries, I learned the true meaning Jimmy's ode to the burger seasoned by the spice of Caribbean breezes.

I imagine it is really one of those, "had to be there to appreciate" things. But every time I hear Jimmy Buffett's Cheeseburger in Paradise I flashback to the perfect moment when I lived the song. 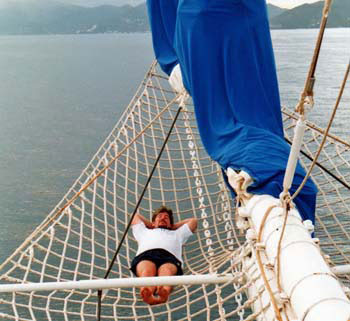 ...and that post was picture perfect. What a handsome pirate you make especially in the very top pic in your ever changing banner (is that what you call it).

You made me want to swing in a hammock between two palm trees while sipping a pina colada in the summer breeze...sigh.

Thanks Gypsy,
Technically it's a masthead. I just changer it like a banner.

Glad you liked the post. Bob Marley, Jimmy Buffet, steel drums. They all send me back to the Polynesia and the French West Indies.

a lovely travel memory, and a fitting tribute to traveling alone. I love it - which doesn't mean I don't go through agonies now and then wishing to be anywhere else, with anyone, rather than alone. Rather like traveling WITH someone, and going through agonies wishing they would shut up and go away.

Thanks Hayden,
I think this one trip stood out for me because it was my first solo effort and I met a great group of people. After that I experienced my share of agonies of pointing at something amazing only to realize that I was alone and there wouldn't be any looking back and sharing the "remember when's." Except in my blog of course :)