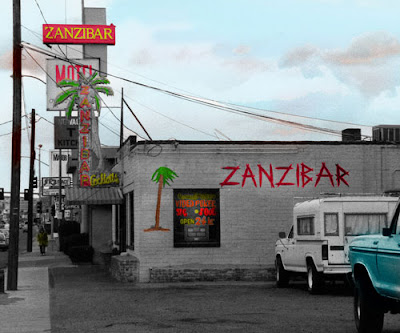 I walked by the Zanzibar, but I never actually walked in it.

It's kind of like the real Zanzibar. I have always been a bit curious about it but never enough to actually go there.

But I may have to settle for the real Zanzibar if I really want to go there. This Zanzibar, in Reno on Virginia Street, is no longer open. I Googled it and it has been closed down. And the adjacent Zanzibar Motel is closed as well. Two transients died there in a fire trying to keep warm in January of 2007. For all I know, both the bar and motel may have been torn down.

That's the advantage of being a country and not a bar in Reno named after one. You rarely hear about them closing down a country and they rarely tear them down (Iraq could be the exception).

I snapped this photo in Reno maybe 15 years ago. I was shooting black-and-white film because I was in my misunderstood artist phase. Plus I had a dark room set up in my laundry room. and black-and-white film was the only kind I knew how to process. I was on one of my annual pilgrimages to Reno to visit my friend Michael (a slot supervisor at Harrahs).

Michael was also a pretty accomplished photographer. He had been a photographer for my college newspaper when I first met him. But a combination of low self-esteem and a highly impulsive and impressionable nature led him to Reno soon after graduation. Reno doesn't normally attract the crispiest flakes in the box and Michael was pretty darn bright so he quickly worked his way up from a slot attendant to a slot host to a slot supervisor.

I've written a few times about my many trips to Reno to visit Michael and our traditional desert shoot outs. More often than not I'd head to Reno when I was depressed and needed the therapy that only the Biggest Little City in the World, my best friend, gambling, drinking and shooting groceries on the desert could provide.

I don't even remember what particular mental malady drove me to Reno that year (see what I mean). I packed my .357, my 35 mm camera and my boots and booked my trip. Michael picked me up at the airport and took me to whatever hotel had struck my fancy that trip (Circus, Circus; the Comstock; the Reno Hilton; or the El Dorado).

Somewhere between shooting sacks of potatoes amongst the sagebrush and shots of Cuervo in Fitzgerald's after a pass through the Lucky Grotto, Michael and I decided to do a photoshoot we were going to publish called, the Art and Architecture of Reno. It was supposed to be ironic because Reno had neither.

So after a buffet at the Atlantis or the Peppermill, we drove around in Michael's Jeep snapping what we thought was the quintensential Reno. 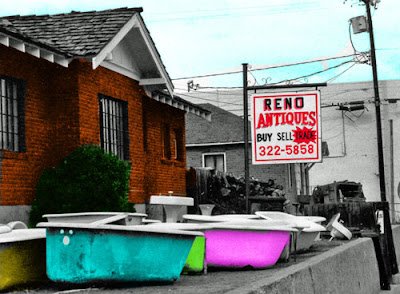 Okay, these two photos were the only ones I really liked. Oh, I have lots of shots of the Reno arch and some great ones of the Nevada Club (also gone). But there was something about the Zanzibar and Reno Antiques that spoke to me. For one, Zanzibar reminded me of the many bars that only catered to locals in Reno. They were places that hunkered down in the shadows of big casinos catering to casino employees who couldn't drink or gamble legally where they worked. Plus most casino workers needed a break from the blue headed bus tour patrons who bitched when the nickel machines didn't pay out after they'd fed at least $5 into them.

The local's bar Michael and I frequented when I visited didn't even have a name that I recall. It did have pool tables, a classic jukebox and drink specials on crap like peppermint Schnapps. I remember getting into the peppermint Schnapps zone one trip there and ending up in my hotel room controlling which direction the bed would spin until I puked.

I always imagined that the Zanzibar was "the" local's bar. A Humphrey Bogart lookalike (although a seedier version) would be behind the bar. Sailor's would be hunched over the bar plunking quarters in the video poker machines sipping Mai Tai's and Whirling Dervishes would be whirling on the five by five dance floor. Fake coconut palms would line the hallway leading to the restrooms and monkeys would pelt you with peanuts as you played pool.

I'm convinced Zanzibar would have been a time or space portal transporting blue collar workers into the Spice Island and a Shangrila with a perpetual happy hour and free ribbed condoms (for her pleasure) in the men's room.

But I'll never know. Because I walked by the Zanzibar, but I never actually walked in it.