We all Shrine on...well, some do 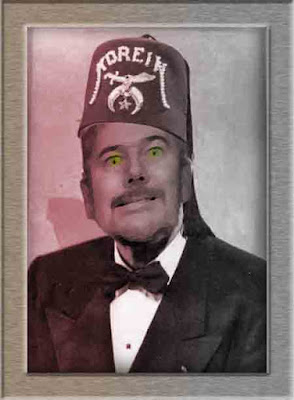 I don't profess to know know anything about Shriners or Masons, but there is just something about a Fez that shrieks of parades and miniature cars. You'd think I would know something about fraternal societies. My grandfather was a Mason. And I understand you have to be a Mason before you can become a Shriner. But don't quote me on that. It's just something I read on the Internet.

Not that you would quote me on anything. Nor should you. I'm someone you don't know writing on the Internet. Any real Journalist would tell you that isn't a credible source. Trust me on this.

My grandfather never progressed (?) to the Shriner stage. And I never got to ask him about being a Mason. He died when I was four years old. I have his Fez, though.

My experience with Shriners largely stems from the only circus that ever passed through Boise when I was growing up -- the Shrine Circus. Occasionally some odd fellow in a fez (not to be confused with the Oddfellows Lodge) would approach my mother and I while walking along the sidewalk in downtown Boise and hand us free tickets to the Shrine Circus. It was an excellent marketing ploy because the tickets were good for a free child's admission with the purchase of an adult ticket at full price.

My mother gave in to my whining eventually and took me to the Shrine Circus. I couldn't have been more than five years old. I just remember thinking the clowns weren't funny and that I wanted one of the souvenir Fez's the Shriners were hawking in the audience. I don't believe I ever got one.

It is just as well. I don't believe I would look good in a Fez. I wrote some time ago about how I have a hard time finding hats that fit since I have such a big head. I imagine a Fez would only compound that problem and give me a slightly Zippy the Pinhead look.

But back to Shriners. They always seem to be old codgers. I can't remember ever seeing a young man who was a Shriner, or a Mason for that matter. Of course, they are secret societies so the young Shriners may not strut about in their Fez's. Though I don't know how secret of a society you can be when you take part in 4th of July parades driving miniature cars pulling a giant Fez.

And for some reason I seem to recall the Masons and the Shriners have some ancient tie to the Templar Knights and our founding fathers. I don't think I've ever seen a painting of George Washington or Thomas Jefferson sporting a Fez. But I'm not ruling out the possibility that those paintings exist.

I have my own reasons for not wanting to be a member of anything. I don't like regularly scheduled meetings for one. And I've already established how I feel about wearing hats. I'm not sure I could master any secret handshakes or keep them secret if I did. I also don't like decisions by committee, fundraising, bylaws, being administered oaths, pancake breakfasts, dues, wearing vests with embroidered patches on them, or people slapping me on the back and telling me dirty jokes (I don't mind dirty jokes, I just don't like them told to me by assholes).

I guess I wouldn't make a good Shriner.
Posted by Time at 9:30 PM

Try a cowboy hat. You can hide all kinds of sins under those, even wing nut ears. Not saying you have wing nut ears but I digress....Jesus....it's contagious!

Why Gypsy, What makes you think I need to hide something with a hat? You can't hide a big head with a hat. It's like putting a tarp on a elephant. It draws attention to the elephant. Besides, they have saying about cowboy hats here, "That boy is all hat and no cowboy."

I thought it was "all hat and no cattle" but hey, who am I? not a mason, that's certain.

Hayden, Variations on a theme: all hat, no herd; all hat, no ranch; all boots, no spurs...etc. I suppose in this case it could have been all Fez and no go cart. :)

What a bunch of digress-ors!

Blaznfyre,
I'd rather digress than regress. I'm not sure what that means, but it sounded pretty good.