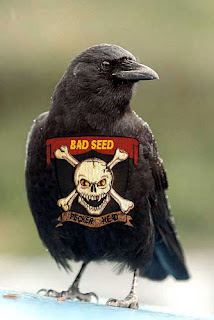 I was standing at the train platform this morning in my usual spot thankful that it is Friday and I'll get two mornings where I can sleep in until 6 a.m. instead of the usual 5:45 a.m. (I have two small children) when I noticed a crow behaving oddly. I suppose it is redundant to say a crow is behaving oddly. Crows are pretty odd birds to begin with.

I say it was a crow, but it could have been a raven. They look alike to me. I realize that is probably being a birdist, but hey, they are all big, black birds. Oh, I know  a raven is supposed to be bigger than a crow, but you can also run across lots of big crows.

Anyway, this big black bird was circling around a telephone pole. Or maybe it was a power pole because I think they put all of the fiber optics lines that telephones use underground these days. I'm not certain why they don't do the same with power lines.

But back to the crow (or raven). It would circle around the pole and then swoop down at this big seagull sitting on the pole. I am certain it was a seagull because they are pretty hard to mistake for any other bird. And I read Johnathan Livingston Seagull and saw the movie. I don't think the movie was as good as the book, though.

This seagull was about twice the size of the crow. But still this crow flies round and round and swoops in at the seagull on each loop. It was like the crow was playing chicken with the seagull. Just to clarify this, the crow wasn't acting like a chicken, he was playing chicken. Though I don't know why they call it "playing chicken." I can honestly say I've never seen chickens running at each other to see which one will swerve out of the way first. And are chickens really "chicken?" If they were, they wouldn't always be crossing roads, now would they?

But the crow was obviously targeting this poor seagull who finally had enough and flew off from the pole. And I'll be darned if the crow didn't chase it. I watched them do dog fight maneuvers above the waterfront. Though I don't know why an air battle got to be known as a dog fight since I've never seen a flying dog.  Anyway, this crow didn't let up and I watched him badger (another odd animal phrase that makes no sense if you really think about it because a badger is the last thing you'd want to annoy) the poor seagull until I lost sight of them behind the senior center that is located across the street from the train station.

While this was all going on there were several other seagulls gliding around doing whatever it is that seagulls do. But not one of them paid any attention to the crow harassing the seagull. You would think they would have said to each other, "Hey, that crow is picking on Waldo. Let's go kick his crow butt." But no. None of them lifted a feather to help.

So it got me to think, what recourse do birds have when they encounter bird bullies? There aren't any bird police or bird lawyers that I know of. They can't file bird restraining orders or no fly zone writs. They are just pretty much SOL.

I thought about this for awhile. Then my train came.
Posted by Time at 8:10 AM