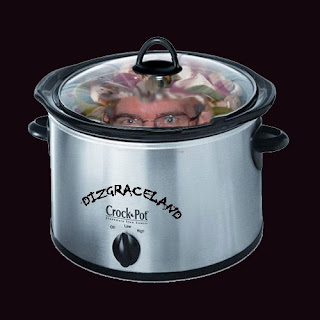 Being a marketing professional, I recognize the value of a good tagline. So I have been toying with the idea of adding one to Dizgraceland calling it Dizgraceland: America's Crock Pot. I think this works on many levels. On one level, I throw a bunch of ideas into a post, put the lid on and let them cook in the Internet ether for awhile until they get all soft, mushy and tasteless (though mostly they are tasteless to begin with). Then I open the lid and slop them onto a plate.

On another level crock pot could just be a play on the words "crack pot." Either way, I think I'm on to something here. Of course, it could be Dizgraceland: America's Crock Post. But that may be a bit too cerebral for most people.

And speaking of crock pots, I had this great idea for a restaurant. There is this chain of successful fondue restaurants called the Melting Pot that make a fortune off from people essentially cooking their own food at their table and charging them much more than if a chef cooked it for them. What if I open up a chain of restaurants called the Crock Pot. The principle would be the same. A smarmy waiter would come to your table, introduce himself as David and plop a crock pot down in front of you. You'd order all of the traditional ingredients and David would bring them right to your table where you'd plop them into the crock pot. Then David would fire it up (he needs to earn a tip, you know) and six to eight hours later you could dish out one tasty crock pot treat for the entire table.

Oh, I know what you are thinking, what are the customers supposed to do while they are waiting that six to eight hours for their meal to cook. Simple: this is where David sells them bottle after bottle of overpriced wine. Everybody knows that wine and liquor is where the big markups are in the restaurant biz. And that's where you make your major big bucks in this scheme.

I'm thinking of trademarking this idea and then selling franchises right out of the chute.  I could be the next Colonel Sanders. You'd see my picture on a big sign outside of each Crock Pot. 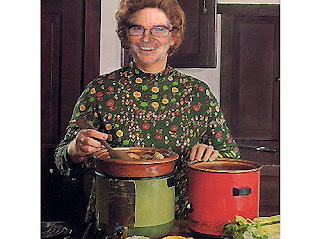 I'm thinking the restaurants themselves could be done up in 50s retro style. I think I still have enough old diner dishes left over from my obsessive thrift store shopping days to outfit at least two or three of the flagship restaurants. I've even thought of some of the great entrees we could offer up:

A Chicken in Every Crock Pot special

A Crock of Chips and Potted Fish

England's Own Spotted Dick in a Crock Pot

Pizza in a Crock Pot

For dessert (for those with another six hours to kill after dinner):

Chip or Get Off the Crock Pot Chocolate Cake

Pudding in a Cloud Surprise

I know all of this is a lot to digest for one post. But if you want to invest in my little Crock Pot of Gold idea, drop me a line.
Posted by Time at 10:53 AM

I think this is a perfect concept for retirees. Someplace comfortable to hang out and shoot the breeze while the aroma of good cooking wafts through the place, maybe have televisions at every table with wireless headsets, a bar, a smoking lounge where oxygen tanks are prohibited (oh wait nevermind the Nanny State Nico-Nazis killed that pleasure.)