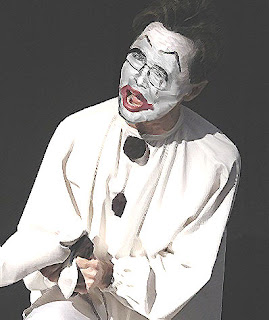 Time on my hands could be time spent with you

--Elton John, I guess that's why they call it the blues

If you really listen to Elton John's song, I guess that's why they call it the blues, you never really discover why they call it the blues. I was staring out of the train window this morning at a gray and rainy Monday morning and tried not to feel blue. But then it dawned on me that I was feeling blue because it was gray and not blue. So shouldn't they say you are feeling gray instead of blue?

"Feeling blue" is yet another idiom that we follow blindly as difficult to trace as why something is none of your beeswax. Ironically we can sing about "blue skys, nothing but blue skys" and be riding high with the bluebird of happiness on our shoulders and not be concerned that singing the blues is usually associated with the feeling you get when someone rips your heart out and plays ping pong with it.

I'm nominating gray as the new blue. Every time I would normally use the term blue to describe feeling depressed, I am committed to using the word gray in hopes that it will catch on and restore some sense of order to the universe. Once that is accomplished I will take on a few more of the things in life that don't make sense, like why Dancing with the Stars

are so popular. Both of those shows really make me feel gray. Not that I watch them. I am still proud to say I've never seen American Idol.  And I've only been in the room when my wife is watching Dancing with the Stars because she wanted to see Kate Gosselin dance. Kate and her ex husband are a couple of other things in the world that don't make sense.

And while I'm ranting about things that don't make sense, I want the people who made the Verizon wireless commercial about the mother throwing a pirate party for her kid and having a cowboy performer showing up know that when they say she has the "pirate paper plates" they are in fact showing plastic pirate plates. This is just wrong from a continuity standpoint and it totally throws off any credibility I could have for your 3 or 4 G network.

Not that I give Verizon any credit for anything. My experience with FIOS internet and television bundled with their telephone package is very similar to the experience I had purchasing Sea Monkeys as a child. I was heartbroken to discover that they weren't in fact monkeys and FIOS doesn't in fact offer high speed anything, especially high speed customer service. Even Magellan couldn't navigate their Web site and make his way to a customer service rep. If he did, they'd just give him a "thank you for your question about Verizon's wireless television spot. We are sorry you objected to the use of plastic pirate plates instead of paper ones. If you call our technical help line between the hours of  2 and 2:15 a.m. (GMT) one of our technicians from Bombay will schedule a time for a service rep to respond to you."

It will be once in a gray moon before I ever do business with Verizon again.
Posted by Time at 8:54 AM

Ya know, I've never taken the time to learn the lyrics to that song - I just made up a story about bedfarts and dutch ovens then tuned out completely after the thousandth time hearing it.

R.,
Coincidently, I do believe he uses a few lyrics about bed farts and dutch ovens. I'm a little gray about where, however.