I don't care if it rains or freezes 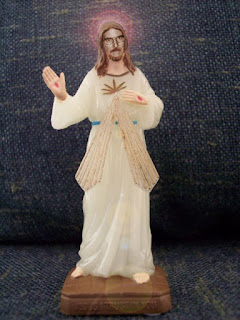 I don't care if it rains or freezes,
long as I got my plastic Jesus
sitting on the dashboard of my ﻿car.
Comes in colors, pinks and pleasant
glows in the dark cause its iridescent,
take it with you when you travel far.
Get yourself a sweet Madonna,
dressed in rhinestone
sittin' on a pedestal of abalone shell.
Going ninety I ain't scary
cause I got the Virgin Mary
assuring me that I WONT GO TO HELL!!!

Just as there are books you must read to be considered well-read, there are movies you must see to be considered well-seen. Now granted not all of the "great" books are page turners, nor are all of the "great" films stuff that rivet you to your seat afraid to go to the bathroom for fear you'll miss a single scene. Part of this is due to the generational nature of "greatness" when it comes to books and films. For example, Moby Dick is on the must read list and Herman Melville was considered a rock star writer in his time. Now Moby Dick reads more like the technical manual from whaling textbook and makes a better doorstop than a great read.

I'm sure I am offending the English Lit majors of the world, but I don't count them as my target audience for this blog anyway and if any of them wander in here and read this I suggest that their break is over and they should get back to serving double tall, no foam decaff lattes at Starbucks with the rest of their English Lit brethren (and don't think I don't get the irony of the Starbucks reference in relation to Moby Dick).

I think great films stand a bit more of a chance to remain great when generations collide. Oh, there is a disadvantage that many of them are in black and white and can't compete with 3-D technicolor with surround sound and scratch and sniff technology. But some films just hang in there. Like Cool Hand Luke for instance. It probably is the greatest Paul Newman film there is. And since he is dead, there probably won't be a greater one. It is right up there with Steve McQueen's the Great Escape for great spit in the face of authority films.

Cool Hand Luke is one of those films you always find yourself quoting at odd moments. I mean there is no better quote than the warden of the southern chain gang prison (played by Strother Martin)  that Paul Newman is sentence to (for the terrible crime of cutting off the heads of parking meters with a pipe cutter) than "What we have here, is a failure to communicate."

There is the great hard boiled egg eating contest. And the memorable scene where Paul Newman strums a banjo while sitting on his prison bunk and softly sings his own version of Plastic Jesus. That my non-existent virtual friends is the definition of greatness.

Of course, the problem with randomly referencing bits and pieces of scene and dialogue from a film you saw for the first time in your youth is that, unless you are at your 30-year high school reunion, no one has a clue what you are talking about. I can say "What we have here is a failure to communicate" until I'm blue in the face and most of my younger co-workers just stare at me, blink and go back to texting. I get the same reaction when I say, "Badges, badges? We don't need no stinkin' badges" from Treasure of the Sierra Madre or "Is it safe," Sir Laurence Olivier's  great line from The Marathon Man.

I hate being thought of as THAT old man blathering on about how I used to be able to buy five candy bars for a quarter when I was a kid (which I could, btw). It is sad to have this database of archaic knowledge in my head and have people look at you like you are wearing spats and bowler hat (which were way before my time...I would be more of the Angel Flight suits and platform shoes generation).

Oh well, none of it matters anyway, as long as I have my plastic Jesus sitting here on my computer.
Posted by Time at 11:21 AM