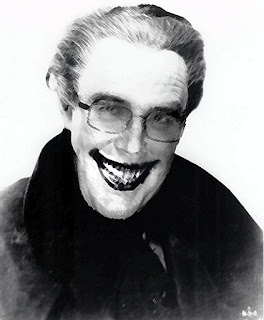 --Gwynplaine, The Man Who Laughs

The Man Who Laughs was a book written by Victor Hugo in 1869 that was made into a silent film in 1928 that ironically you couldn't hear the man who laughs laughing. Not that he probably did much laughing. The main character, Gwynplaine, is the son of a lord who pisses off the king. The king has a permanent smile carved into Gwynplaine's face as punishment for his father's treachery and the boy is sold to gypsies who abandon him in a snow storm. He rescues a baby girl held in the frozen arms of her dead mother and is in turn rescued by a traveling vaudeville producer and eventually becomes a clown in the producer's sideshow.

The plot gets more and more complicated. The baby girl Gwynplaine rescued is blind. She grows up and falls in love with Gwynplaine oblivious to his hideous grin. And Gwynplaine is afraid to tell her about it for fear she will be repulsed and reject him (obviously they never kissed). I could go on and on unraveling the plot line, but you can google it for yourself if you are interested. I only bring it up because I stumbled across The Man Who Laughs while I was searching for an image of a sad clown for yesterday's post about singing the grays. Or more correctly I stumbled across a photograph of Conrad Veidt, the man who portrayed Gwynplaine in the movie. It was a pretty disturbing image. And interestingly enough it was the inspiration for the original Joker character in the Batman comics.

Life is pretty interesting like that. One minute you are searching for a photo of a sad clown and the next you are discovering an obscure 1928 silent film that spawned the Joker. And then you can't help but Photoshop your face on the image of the man who laughs.

Go figure. I guess I get the last laugh.