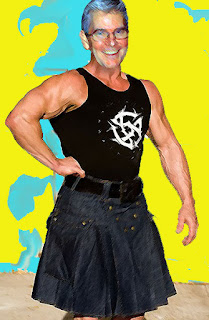 At what age do you stop being cool? And I'm not referring to the age you should stop trying to be cool. Anyone at any age who tries to be cool never will be. I'm more curious about that point at which no one looks at you and thinks, "He is pretty cool."

I see people of all ages who are way past being cool, at least from my perspective. They are the ones who have embraced a trend. Or they are the ones who embraced a trend many years ago and couldn't quite pry their death grip off it. Ponytails, mullets, Mohawks, DAs, perms, Rasta hair (unless its your religion and you live in Jamaica), neon dye jobs,  Flock of Seagull flips, mousse induced gel-mets or anything else that draws too much attention to your head weren't cool when they were popular and they aren't cool now.

Excessive piercing of anything lacks coolness. Pierced ears on men who were in their 20s in the 80s is okay. Continuing to wear an earring into your 50s and beyond is not. Excessive tattooing also lacks coolness. Calling them "tats" is especially uncool.

On the clothing front, wearing a utilikilt is about as uncool as a guy can get. Wearing one with either an Australian outback duster or leather trench coat AND a ponytail should get you stoned and shunned by the other villagers.

Basically wearing anything "to make a statement" does. It states that you are trying to stand out when you never really will. Wearing a lampshade on your head doesn't make you the life of the party. It makes you an obnoxious drunk.

I suppose going off on a tirade about what isn't cool, isn't cool. But I have never considered myself cool. I have at various times in my life tried desperately to be cool and failed miserably. I wore an Angels Flight suit in the 70s just like John Travolta.  I pierced my ears in the 80s. I had a perm during the same era. At one time in the 90s I sported a pony tail. I have a tattoo that I got when I turned 45.

I am happy to report I have never worn a utilikilt. I have worn a leather trench coat, but it was only when I was trying to be like my friend Gunter (long story that very few people would understand).

There was one time in a bar many years ago that I was feeling cool (beer will give you that temporary illusion sometimes). I was sitting on a barstool at a table with a friend when I noticed a table of attractive young ladies looking over at me and smiling and then whispering to each other and giggling. The more they smiled and stared, the more cool I tried to act. I sat in that stool with my cool Levi's on, striking my best James Dean cool pose when one of the ladies stood up and approached me. She leaned over and whispered in my ear, "My friends and I were debating on which one of us should come over and tell you that your fly is open." She then walked back to her table. I slunk off to the men's room to button my fly.

I do think it is kind of cool to admit that you aren't cool. I actually embrace my inner uncoolness. Since having kids, I have especially become uncool and fully expect to achieve the pinnacle of uncoolness by the time they become teenagers.

Some comebacks come to mind for your not-so-fly moment:

"Oh hey thanks! I thought I felt a draft. Damn cold makes my thing look like a pencil and two marbles doesn't it?" If she looks then smile at her salaciously and tell her to quit taking advantage of you.

"Why don't I button this thing up and then we go some place quieter and see if you'd like it unbuttoned again."

"Well it got you over here didn't it? Why don't you tell me your name while I get this thing buttoned up."

When you're a man you don't need to prove yourself. When you're a boy you just get scarred for life trying to be cool. I've noticed that there are lots of boys with male pattern baldness in this country. The women aren't any better.

Oh I had lots of comebacks but none of them occurred to me until well after I'd slunk off. My favorite would have been, "Well, if you want to catch a fish, you've got to use the right bait."

And if the cold makes your thing look like a pencil and two marbles than you must take after your father and not your uncle :)

Is it okay to admit to knowing what your brother's junk looks like in the cold?

I can honestly say that my father's "vestments" weren't even on the radar while we were wading around in the snow-fed icy cold Idaho rivers and streams.

I dunno about that "catch a fish" line. My mind immediately went to a replay of my father braining square-jaws and suckers on the rocks then throwing their twitching bleeding bodies up the bank to be eaten by scavengers.

R.
All I'm saying is that I know what my junk looks like, even cold and it ain't no pencil and two marbles.

And your point about the fishing analogy?