Going to my happy place 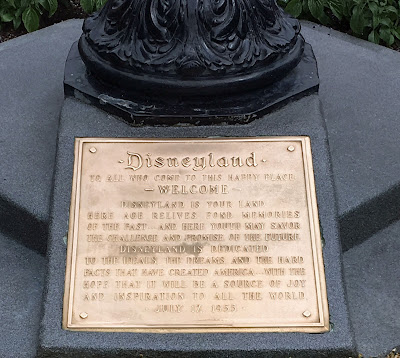 I just returned from a family vacation at the Disneyland and California Adventure resorts. It was the third trip for to the parks for my family and about the 13th for me (including one trip to Walt Disney World when I was in college).

I have mixed feelings about Disney. When I was a kid, one of my favorite programs was Disney's Wonderful World of Color. It came on every Sunday night and was hosted by Walt Disney himself. Occasionally the theme of the program would be Disneyland and they would showcase some of the latest rides or show celebrities like the young Michael Jackson exploring the attractions.

I remember one of our neighbors had been there and lent my father a copy of a map of magic kingdom. I'd sit in my room with the map on my bed fantasizing about actually being able to go there on vacation. Since our annual family vacation was two weeks camping in the mountains of Idaho, I never really thought Disneyland was an option. Even back then, Disneyland was too expensive for many lower middle class families like mine.

When I was 15 and a sophomore, my high school marching band raised money to travel to southern California to march at the half time of an LA Rams and San Francisco 49ers football game. We flew into San Diego (my first time on an airplane) and went to the San Diego Zoo and then Sea World. From there we boarded tour buses and drove to LA. Before performing at the football game we were also booked to march down Main Street in Disneyland. We made it to Disneyland, but we never got to perform. It rained too hard for us to risk ruining our band uniforms before the football game. 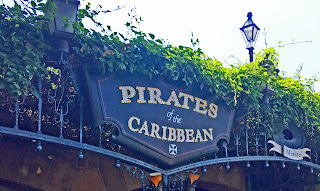 But it was my introduction to Disneyland. Disneyland was only three years older than I was. Pirates of the Caribbean had only been open for six years (just a year after Walt Disney died) and Space Mountain wouldn't open for another four years. At the time, Disney was still using ticket books. There were A, B, C, D and E tickets. The E tickets were the best rides (Pirates of the Caribbean, the Matterhorn and It's a Small World).

Even in the rain, Disneyland was pretty much amazing to me. I took several trips back there, including one right after graduating from high school. I convinced my parents to make the pilgrimage. I think it was the first time my father and mother had been on an airplane. I remember being in the park and a Donald Duck character approached my father as he sat resting on a bench. I snapped a photo (while the duck waved at me impatiently to hurry up and take the photo). My father looked so happy and the photo was one of his prized possessions.

So I've been going to Disneyland over a 45 year span. And it certainly has changed. There are no more ticket books. You still wait in lines, but you can get a Fast Pass for select rides and come back at an allotted time to avoid a long wait. Now you can also use a Max Pass and get your Fast Pass via a Disneyland app. You avoid paper all together and just scan your smartphone at readers at the attractions.

Other things have changed at the Magic Kingdom. In addition to having many new rides, some of the older rides have undergone some politically correct renovations. The Pirates of the Caribbean used to have a part of the rider where the pirates were auctioning off ladies kidnapped in the town that was being pillaged. Now the pirates are lining up towns people to surrender loot pillaged from the village.

It's nice to see pirates portrayed as more sensitive. They are still trying to get the mayor of the town to reveal where he has hidden his treasure by repeatedly lowering him in a well.  So apparently torturing people is still okay.

What hasn't changed at Disneyland are the hordes of people consuming everything (food, merchandise and experiences) at an alarming rate and at an alarming cost. Three days at the Disney parks for a family of four can cost you as much as a year's tuition of college used to cost (at least when I was in college). To put it in perspective, between food, lodging, park tickets and merchandise, I could have purchased my parents first house that was built around the time Disneyland.

One of the first things I think every time I walk through the gates into Disneyland (or now California Adventure) is that there are way too many people in the world. And they are all at Disneyland. They is also a high percentage of them pushing doublewide strollers with two or three kids in tow. We were in line at Pirates of the Caribbean at 10 p.m. one night and a couple in front of us had a 7-week old baby and a year and a half old toddler. The father kept tossing the toddler up in the air and saying, "We're going to see Jack Sparrow!"

That is wrong on so many levels.

The other high percentage of the masses at Disneyland are driving around in electric mobility scooters that are normally used by people with disabilities. But many of those at Disneyland are rent-a-scooters that were being used by fairly large people to avoid having to walk around the Magic Kingdom.  So between the strollers and the scooters, walking in the Disney Resorts is almost as scary as plunging 50 feet down Splash Mountain. 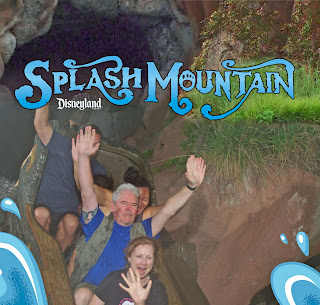 At the end of the day, none of the people at the happiest place on earth seem really happy. They seem more tired from dodging strollers and scooters, stressed from trying to get one more run on the Guardians of the Galaxy ride, frustrated from standing in a line at the Indiana Jones ride for an hour when the standby line sign said 40 minutes and broke from eating $30 entrees at the Blue Bayou Restaurant.