And miles to go before I sleep 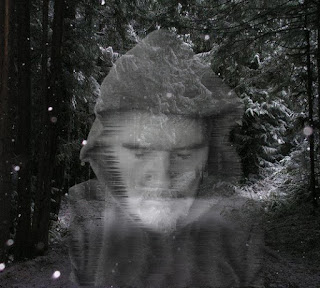 --Robert Frost, Stopping by Woods on a Snowy Evening

It is pretty clear that Frost is talking about death when he says, "And miles to go before I sleep." He's also talking about having lots to to before that happens. But since none of us can really know when the big sleep is coming, you can't really count on how many miles you have left.

In the movie The Crow, the villain talks about being given a snow globe as a child that contained a cemetery. His quote was, "Childhood is over the moment you know you're gonna die." I remember my grandmother (who lived next door to where I grew up) used to tell me on a regular basis that she wasn't going to live for another year. This went on until I was 17 and she really did die. She died at home in bed and for some reason my mother made my brothers and I go next door and look at her lifeless body.

She was my father's adopted mother and my mother never did care much for her. My parents had her buried next to my grandfather (who had died when I was four). There was no funeral. They claimed she hadn't wanted one. Not that there would have been many people to attend. My grandmother never visited with anyone but our family.

Regardless, it was the first time I'd ever seen a dead person. The next time was when I attended the funeral of my other grandmother and they had an open casket funeral. I remember filing by the casket and looking at my maternal grandmother and thinking she looked nothing like my grandmother. I also remember my Uncle Ira standing next to the coffin and waving at her and saying, "Bye, bye mommie." Uncle Ira had been released from the state hospital to attend the funeral. And I remember my Aunt Gladys standing next to the casket snapping photos of my grandmother's corpse with one of those old cameras that used flash cubes. She later appalled my mother by asking her if she wanted to see photos of their mom and showing her a packet of the shots of her lying in the casket.


Families are odd about death. Mine was even odder. Though my mother's family at least had funerals, my family seemed to develop a tradition of just letting people die without fanfare. When my father died, my mother had him cremated quickly. There was no funeral or memorial service.  He died in January. It wasn't until the following August that I went with my brothers, my mother and my four year old nephew and scattered his ashes in the mountains.

I was with my mother when she died.  I remember feeling disconnected from the whole scene as we waiting for the coroner and funeral home to come collect her body. She had prearranged her cremation. Since she wasn't around to protest, we held a memorial service for her. This was seven years ago and I believe her ashes are sitting in my brother's living room buried by clutter above his computer desk.

Like anyone my age, I wonder what death is like and what happens then. I fantasize that it will be peaceful and my final words will be something like, "I hope I don't have to meet up with all of my relatives after walking into the light. It would be too much like having Thanksgiving with your family for eternity."

And that would be hell. Oh well, I hope I have a few good miles left before I sleep.