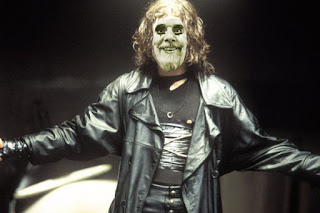 I was walking across the street from the train station to my office. It was the usual crowd of commuters swarming across the crosswalk. One lone person was crossing against the stream with their arm raised in the air, middle finger extended. He was screaming "Murder is hot blood." He was pulling a suitcase with crap popping out the edges so I assumed he was a street person. Hell, he could have been a commuter, but most don't scream on the outside about murder and hot blood.

With the state of the country, I'm surprised more people aren't walking around pulling suitcases, flipping the world off and screaming about murder and hot blood. I was in L.A. last week and everything seemed to be on fire. It's hard not to think we are all being punished for what humankind has done to the earth.

Sad though, that most people think they are victims and aren't responsible for where their life has taken them, including the screaming homeless man flipping off the cosmos. Of course, he was likely mentally ill. You can't really blame a person for being out of their mind.

Our of their mind. Funny we use that phrase to refer to a crazy person. But every day I meditate and technically am trying to be out of my mind. Being in your mind is what causes most of the problems.

I catch myself thinking I'm a victim sometimes when I'm in my mind. I feel unappreciated and inconsequential. Then I remind myself that I am where I am and who I am because of all the choices I've made. And I'll be where I'll be because of the choices I've yet to make.

Then I grab my suitcase, raise my middle finger and start screaming.