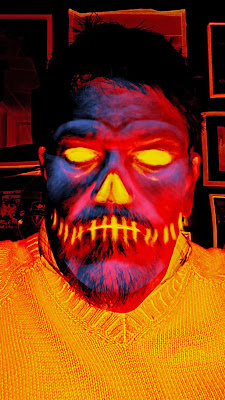 I stopped dressing up for Halloween after 6th grade. On occasion I would wear a costume for a party but I always felt self conscious. I started dressing up for Halloween again when I had kids and would take them trick or treating. But they have reached an age when they want to trick or treat with their friends. While I still have to shadow them to make sure they are okay, it will be from a respectful distance.

Since I don't want to appear like a creepy old man in a costume following around a bunch of kids, I am not going to wear a costume tonight. And honestly I am relieved. Because I'm a bit tired of being a geriatric pirate or skeleton or zombie. It will be nice to just walk along with my regular, every day me mask.

Which is apparently an old man.

Ironically, years ago when I still lived at home with my parents I put on this old man rubber mask and old man clothes and went to the front door and freaked out my mother. Little did I know that forty some years later I wouldn't need the mask.


As it turned out, I just had to follow my son and several of his friends dressed like T-Rex dinosaurs. They had these inflatable dinosaur suits that are kept inflated by a battery operated fan. At one point or another just about all of them had costume malfunctions that required new batteries. They were quite the hit though. It was a kick to see what appeared to be a herd of dinosaurs crowding doorways asking for candy. 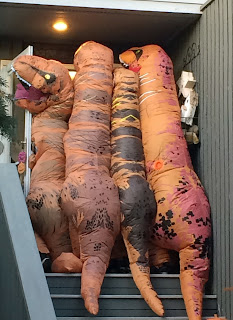 No one really noticed me. I have grown to prefer that.  Because I firmly believe that if people notice you, it is generally not a good thing. But in retrospect I wish I'd thought to dress like a Jurassic Park ranger.

Oh well, I guess I'll leave the Halloween stuff out through tomorrow since it is technically still Day of the Dead through November 2.
Posted by Time at 2:47 PM