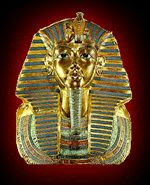 Okay, if I were a religious man (which I'm not) and believed in signs (other than the standard traffic ones you have to know to get your driver's license) I'd say I have been cursed. I base this on standard Biblical standards of plague and pestilence and on some major motion picture references to curses. I think it has something to do with cutting down the trees (if you've been following me up to now, you know more about the trees than you wanted to know...and by the way, I still have plenty of free firewood if you are interested...if you don't know about the trees, see my archives).

Right after the first tree was cut down, I was attacked by Yellowjackets while cleaning out my gutters and stung four times. Okay, it wasn't a plague of locust, but it hurt like hell. That was the first sign that something was amiss.

Next I went to the doctor (who I've neglected to visit for a couple of years due to schedule conflicts and a basic lack of faith in the medical profession) because my Yellowjacket stung arm had swollen to the size of Rhode Island (not big for a state, but pretty big for a swollen arm). As usual, the doctor gave me advice that pretty much matched most of my co-workers advice, take Benedryl. He then took a sharpie and outlined the red part of my arm and told me that if the red spread much further I should return because that would indicate that the infection was spreading. This is the best a man with a medical degree could come up with.

So, how was the trip to the doctor a curse? It reminded the doctor that I hadn't been in to see him for some time and that I was in need of a full physical. Suffice it to say, that, although it may be recreation for some, having a full body cavity search is not my idea of fun.

It was an unusually dry summer for Seattle, and then, a few days after the corpses of the trees reclined pitifully in my backyard, the rains returned. I woke up with a large puddle of water on my kitchen floor dripping from the light fixture. I'm no expert, but this is a sign of a leaking roof...a roof that is only six years old. For those who know roofs, six years should be the equivalent to the roof being in elementary school...well maybe middle school, but it certainly shouldn't be ready to retire. Thus began the saga of the roofers. The bids ranged from $300-$8,000 depending upon how serious I was about actually stopping the leak.

So, I called up the pest control place I'd asked to come out and deal with the Yellowjackets and cancelled, because I didn't want to pay $480 to kill wasps when I was faced with a potential $8,000 roof bill (on top of the $6500 I'd just shelled out for all new windows and the $700 I'd paid the tree service to kill the trees that cursed me in the first place). The pest control people were not happy. Not a curse, you say? Well it gets better.

Then I decide to refinance to get some cash to pay for the roof. Rates are still low, and I find a pretty decent deal on a 15 year mortgage. It still hasn't closed, so I'll let you know if it becomes part of the curse.

Anyway, I come home this weekend and the house smells like something died in it. My cat was still wandering around looking very much alive and her litterbox was relatively clean, so I ruled her out. But still, the stench was disgusting. I finally figure out that something has apparently crawled under my house and died. On top of this, flies begin showing up inside my house in major numbers, apparently hatching from whatever has died under my house. It is very much like that scene in Amityville Horror (the original, not the many sequels) in which flies plague the home.

My solution? I bough a flyswatter and a can of vanilla air spray. Now, I could crawl under the house looking for whatever died under there, but a) I'm claustrophobic, b) I've been under there before to fix the dryer vent hose years ago and I still have nightmares and c) I'm not sure I want to find out whatever died under there in case it has friends or relatives. I figure I only have to put up with the smell for a couple more weeks and nature should take care of it.

Okay, so the night I come home to discover that something has died under the house, my girlfriend broke out in a major rash while vacuuming my living room. Let's see, a plague of insects, flood, putrid odors, flys, and now pestilence. Can you say, "Curse."

So, it comes full circle to me having the trees "removed." But then again the tree service guys could have been in cahoots with the pest control company and planted the Yellowjacket nest while they were "removing" the trees. For that matter they could have poked a few holes in the roof while they were at it to get their buddies, the roofers, some business too. For all I know, my doctor is related to them all.

Bottom line is that I can't help but believe there is a curse here and it started with those trees (but I'm not ruling out the devils at Epinions.com or the telephone company seeking retribution after I unmasked them). But, at least it forced me to stop procrastinating and refinance. Because if Bush gets re-elected the rates are going back up and the economy will tank. Now that's a real curse.
Posted by Time at 11:15 AM

Hmm. Maybe those were some ancient sacred trees, or something.

You certainly sound cursed, to me. My suggestion to you: Get a book on how to write screenplays, because I see one of those campy Poltergeist-esque movies in your future.

i took the liberty of using your "e" photo for my blog. im just learning. let me know if not okay. thanks.

I don't even know you, I just googled "something died under my house what do i do?" My point is, I sympathize with you my friend. I just bought my first house and it is wearing me out. I'm in Houston, TX and something has died under my house. I too would rather endure the wretched smell than crawl under my horrific crawl space and come nose to nose with some decayed vermin. The thing that makes mine worse is that I woke up this morning and my kitchen floor is covered with magets. It is def. the most horrific thing I'[ve ever seen. They are crawling out from every crack and cranny. I've been sucking them up with my shop vac all morning. My housewarming party is on 10/01. I feel like burning the m/f down.

I feel your pain. I had a plague of flies when the thing under my house died. I can't imagine dealing with maggots. I eventually did sell the house in question and the inspector noted to the new owners that he had found a dead rodent under the house. He recommended it be removed.