Just when you thought it was safe -- Log Blog III 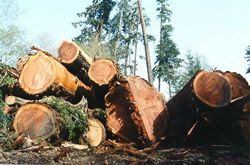 When I got home last night, there was a large chipper parked in front of it. To those of you who followed my saga of cutting down the trees, it is no surprise that I found this to be an ominous sign. I had immediate visions that the disgruntled tree service had returned to cause more damage after following my now infamous blog expose. Sure enough, my backyard was once again littered with branches and tree removal equipment. Debris was covering my new twin-burner gas grill that I'd left the cover off. On closer examination, I discovered that my neighbors were removing two trees that stand (soon to be stood) on our property line. And being the socially inept people that they are, they failed to warn me that they were doing it and that the tree service would be using my property as a staging ground for the assault on the trees.

Okay, I won't miss these trees. For years they have showered my roof with needles and pitch. Every winter they drop major branches that smash the fence between my twitty neighbor and I (if they fall in his yard, he has this nasty habit of chucking them into my yard and it's his stinking tree). But, you can't blame me for feeling a little dread after my experience with removing trees and the subsequent curse. Nothing but trouble can come from it and I hope the curse moves blithely over to my neighbor and he gets to deal with plagues of yellowjackets, leaking roofs and dead animals in his crawlspace. He, after all, deserves it.

I've never claimed to be a good neighbor. I believe in privacy. I mind my own business and the neighbors can just mind theirs. I'm cordial, mind you, just not effusive when it comes to dealing with my neighbors. This guy and his family, however, haven't said boo to me since they moved in several years ago. So, we've been engaged in a "Cold War" of sorts. And he goads me every chance he gets. In addition to chucking his stinking branches into my yard he puts these stupid artificial sheep in his front yard next to this large black bear made out of some plastic material. Okay, a man wants to purchase artificial sheep, that's one thing, but they should be confined to the privacy of his bedroom and not displayed in the front yard.

He also has a son who plays in a crappy garage band. They had a big birthday party a few months ago and his son's band played in the backyard like it was a park or something. This is a neighborhood, not an amphitheater. They didn't have the courtesy to invite me nor warn me about the party, either. I'm glad it rained on them.

Okay, here's where the tree thing gets weird. As I'm getting into my truck this morning to drive to the park-and-ride lot, the tree service truck pulls up and, get this, it's the SAME tree service that did such a crappy job removing my trees and bringing down a curse on me! And as the kid driving the truck gets out, he gives me a sheepish (no pun intended) grin and a weak wave. The schmuck neighbor must have seen them working in my backyard and hired them to cut down his trees just to tweak me kicker is that they are the neighbor's trees and I've got the evil tree service working in my yard to remove them. So, I'll get the brunt of the debris.

Will this madness never end?
Posted by Time at 10:38 AM