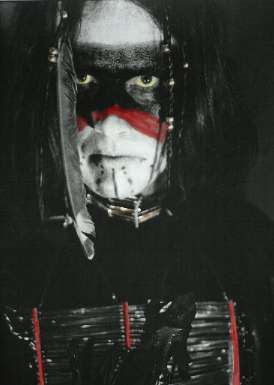 Several years ago, when I fancied myself an artist of sorts, I created a series of native American chokers and breastplates fashioned out of non-traditional materials such as glass and copper tubing. But, I wanted to take my art a step further and become part of it. So, I asked a photographer friend to take shots of me decked out as what I called, "TheUrban Native." I took the black-and-white images and took my art up one more notch, as Emeril would say, and colorized it and framed them with actual feathers and copper beads. It was my three-dimensional potrait of myself and my art.

Other than frightening a few friends and co-workers (including the friend who took the shots), the images never really caused a stir in the arts community. But I've always like them. I've always liked the shocked reaction they get when people realize that the Urban Native is me. 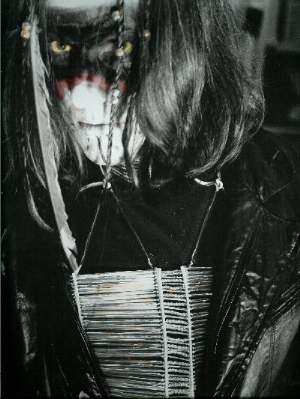 But, basically, I'm the only one with any copies (except for the photographer, who I believe keeps the one I framed for her somewhere in a closet if it hasn't made its way to Goodwill). In July, my girlfriend and I took a cruise to Alaska. And in Juneau, I found a native American mask (actually I believe it was carved by a native Canadian) that I bought to add to my collection of masks from various parts of the world. It wasn't until a few weeks later, after mounting the mask on my wall, that I noticed the resemblance. 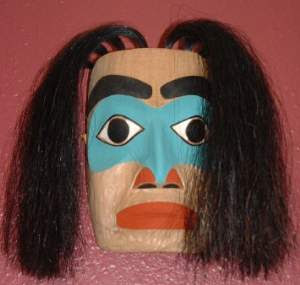 Ok, the color scheme is a bit different, but the eyes and hair are pretty much the same. My point? If you read my blogs, you should pretty much have given up on a point by now, but it pretty much drove home to me what I had originally had tried to capture with the Urban Native series. Despite our our high-tech lifestyle and so-called modern civilization, we are all still pretty much struggling with the same issues as the tribes that came before us. We just use different names like neighborhoods, communities, cities, counties and states. As an urban native, I still start a fire, cook my meat, worry about staying warm and keep the night at bay for fear of what's beyond the circle of fire. My lodge is a split-level wood hut with indoor plumbing.
And as you've seen from my blogs, I still struggle with the spirits that inhabit my trees, live (and die) in my crawlspace and inhabit nests in my gutters. I also struggle with the really nasty spirits that come into my house through telephone lines and e-mail. And I leave signs and symbols for those that follow in my footsteps.
Because I'm an Urban Native. 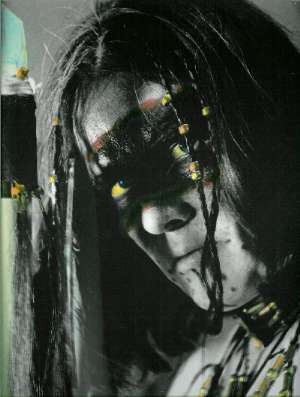 Excellent pictures, very striking. I love the mostly black and white, with touches of red, it's so dramatic. Great entry, too. I wish more people would stop to realize it, and embrace the primitive.