How many surrealists does it take to change a light bulb? 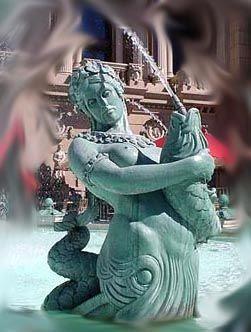 I suppose not, but that has always been one of my favorite jokes, because, I am a Pisces. I am what the astrology world calls a double Pisces

. I have a Pisces Sun and a Pisces Moon. If you know anything about astrology, you are probably wondering how I can possibly function? Well, if you must know, my Mercury is in Aries and Mars is in Aquarius. I believe that Venus is messing around in Aquarius, too.

Oh, and I was told by an astrologer

that I also have a yode in my chart. This same astrologer also told me she had to stop looking at my chart because it was giving her a headache. I don't think that was a good thing...the yode or the headache.

Ok, you are probably looking up "yode" in the dictionary and thinking that I am just messing with you because the only thing listed there that is anywhere near "yode" in the dictionary is "yodel." And though I've been known to yodel on occasion, I don't believe it is caused by the position of the planets at my birth. A yode, apparently is an astrologically term for a rare pattern in a chart. I had it described to me as something akin to a "fickle finger of fate" pointing me at some cosmic thing in life that I was destined to do but probably will never figure out.


That sucks. I mean, I think it is true, because my entire life I felt there was some purpose I was supposed to serve but it was always dancing there in my peripheral vision just out of my perception.


Yet another astrologer told me I was destined to be a "social documentarian." At the time he told me that, I already had a journalism degree but was basically writing hack PR crap. I told him I wanted to be a novelist. He just shook his head and said in his thick mid-Eastern accent (which was pretty weird since he was Swedish) that "No, you will make your mark in the world of video or electronic communication."


This was pre-Internet days, so now I figure he must have been talking about the Web. I mean I was one of first people to mess around with HTML and blaze innovative new information trails with Disgraceland

(which eventually became Dizgraceland due to a minor timing error buying domain names). I introduced people to page after page of useless stuff vaguely related to Elvis

. But what I think the yode and the astrologer were really pointing me to was blogging. Because I (and millions of other bloggers, many not yet out of puberty) am now beaming my social documentarian views of the world into millions...well thousands....ok maybe a couple of dozen people's computers. And if I can only make a minor impression on just one person's life than maybe I will have fulfilled my destiny and can get on with important stuff like watching satellite TV.


Forgive me, it's the yode talking.

Thanks for the mention, I appreciate it :D

Who knows, this blog may be just a spring board, for even greater online journalistic things. I mean, look at my buddy GE, over there, he's almost famous. (Crazy as a bedbug, but, popular, for some reason) You have a lot of interesting things to say, and you have a great writing style. Exposure, exposure, exposure. Maybe it'll happen.

The Force is strong with this one.