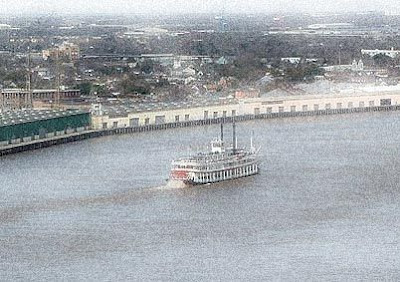 It is 2 p.m. in the Big Easy and the pipe organ music has started up. It starts up everyday at this time. If I knew where it was coming from, I'd call in an airstrike. For some reason it only plays German folk songs I remember from high school German class. I could just be hallucinating. The cold medicine keeps me in a fog.

Wait, they are playing "Way down upon the Swannie River" now which makes a bit more sense here in the deep south.

My next marketing workshop begins in 20 minutes. It will be three hours on "Brand Measurement, Its Purpose, Potential and New Approaches." You would think marketing people could come up with a catchier title like, "Burning your brand deep in the dark recesses of the mindless consumer's soul-- a Primer."

It's a bit cold and breezy here in the big easy (sorry...cold medication. It kicks in an out. I woke up at 3 a.m. unable to breath or ge back to sleep. Thank god for the history channel. I watched a rousing documentary about that sneaky German General Rommel and how he eventally met his match against Montgomery in the deserts of Africa. That was followed by a documentary about th British Crown jewels (and no it wasn't about what Prince Charles is packing in his Levi's...these were real diamonds and rubies and much bigger).

I walked around Jackson Square at lunch time. Most of the buskers weren't out. Maybe mimes don't work on Wednesdays.

I went to the Workshop Reception last night. I never turn my back on hospitality. There were about eight people jockeying for position to get their share of chips, dip and cheese. I snagged a glass of Merlot from the bartender and only had to listen to him tell three people that the deepest part of the Mississippi was right outside the window.

I sat at a table by the window and was joined by two guys from the conference engaged in a conversation about how deep the river was. One was Dennis from Chicago (originally from New Orleans) and his friend from Baton Rouge. They seemed like nice enough fellows, though Dennis was a bit vague about what type of marketing he did. He said something about helping a bunch of small businesses market their services. If I were an imaginative type, I might conjecture that, considering Dennis was dressed all in black, had obviously dyed his hair black, sported a pencil mustache, and could have been cast immediately in an off-Broadway production of "Guys and Dolls" that his business in Chicago was "family-run" if you catch my drift.

Not that there is anything wrong with it. Dennis and his Baton Rouge buddy were on their way to a jazz club where anothe friend was playing. They didn't invite me to join them and I would have politely declined if they had. I'm not a big jazz fan. It always sounds like a high school band warming up to me.

Not that there is anything wrong with that.

Anyway, Dennis kept asking the waiter when the shrimp cocktail was going to be served. He and the man from Baton Rouge seemed to think this was the height of hilarity. The waiter responded, "At 7:05 p.m." The reception ended at 7 p.m. Little did I know it was open mike night at the Wyndam.

Dennis and his friend left and I heard them stop at the bar and ask for "to go" cups of wine. The waiter came by and said, "I see you friends have left." I countered with, "I guess that means more shrimp cocktail for me." He had no response to that so I guess that ment I won the comedy laugh off that night.

Since I have to get to the workshop and this story doesn't get much better, I'll close for now. Let the good times roll.
Posted by Time at 12:03 PM

Just had to let you know that your comments about your ex: "I dated a woman years ago who was a Nichirun Shoshu Buddisht (They chant Nam Myho Renge Kyo on a regular basis)." That was hilarious. You should really consider blogging an expanded version of this story.