You ain't nuthin but a Blue Dog... 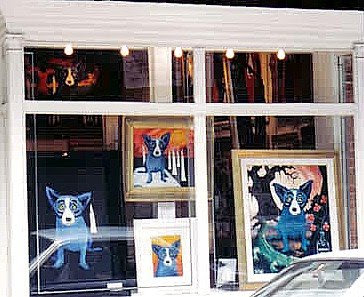 I may have mentioned that my favorite street in New Orleans is not Bourbon Street, it's Royal Street. You can walk along Royal on any given day and not be assailed with the perfume of Bourbon Street (beer, vomit, urine and disinfectant). It has great shops and you'll always get serenaded by a street musician or two. But one of my favorite places to walk by is the Rodrigue Gallery at 721 Royal St. It's one of two galleries that sells the art of George Rodrigue, best know for his paintings of the Blue Dog.

You can read a biography of Rodrigue at http://www.art4now.com/biogr.htm but in a nutshell, he grew up in Louisiana and studied at the University of Southwestern Louisiana and the Art Center College of Design in Los Angeles. Hi work is inspired by the mystical folk tales and ethereal bayous and swamps of South Louisiana.

The really cool thing about Rodrigue is that he used paint in the company of a little black and white spaniel/terrier called Tiffany. In 1980, at age twelve, Tiffany died, leaving a void in Rodrigue's life. To help fill that void, Rodrigue began adding Tiffany's image to his work. In 1984, while illustrating a book of ghost stories, Tiffany became the inspiration for a Cajun werewolf. Rodrigue painted her blue to add to the goulish image and thus the Blue Dog was born (or reborn).

Anyway, I like the Blue Dog paintings, but, being the price of a used car, I can't seem to fit them into my budget. But Rodrigue did inspire me as I walked the streets of New Orleans and I snapped some photos of some other "Blue Dogs" (digitally enhanced only slightly): 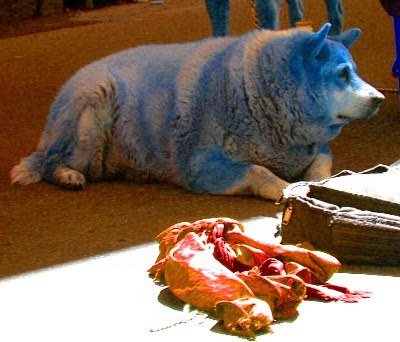 This blue dog belonged to some of the "blues" musicians playing on Royal Street. I liked the way he stared wistfully at his owners while they played. 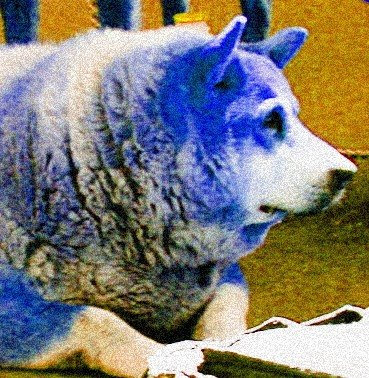 And last, but not least, here is my homage to "Blue Dog III" in honor of the iconic Lucky Dog carts made famous by John Kennedy Toole in his Pulizer Prize winning novel, Confederacy of the Dunces. 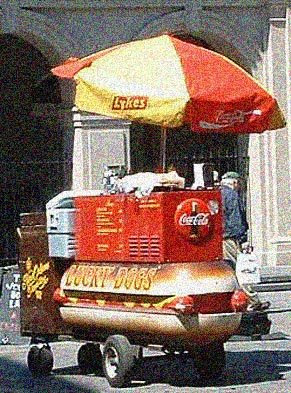 Anyway, here's to George Rodrigue and the Blue Dog, Tiffany.

This is very good work. Love it, love it!!! I prefer your blue dog to the original Tiffany. I couldn't help thinking of a blue snow cone. First time I ever wanted to lick a dog.