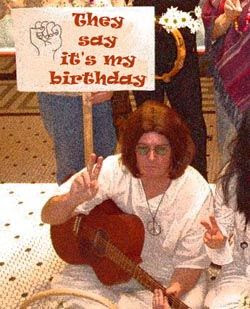 At least according to the department of licensing and the social security administration, it is. They can't quite agree on the year, but they do agree that March 18th is my birthday.

I went in a couple of days ago to get my license renewed. And I've got to admit that the DOL has really got dealing with the lowest common denominator of humanity down to a science. Upon entering the office, you are immediately required to take a number based on the purpose of your visit. I chose, "Renew my license" and was issued number 467. There were about eight different windows with eight different numbers going. If I didn't better, I would have thought I was in a keno parlour in Vegas. My number came up pretty darn quickly and I took my well-worn, seven year old driver's license to the clerk.

I don't know what it is about situations like this that make me immediately feel guilty. I haven't done anything wrong and I have a pretty spotless driving record (not bad considering I've had a license since I was 14...they let you get one young in Idaho so you can drive tractors). But the minute the DOL clerk started typing in stuff on the terminal, I knew something was wrong.

"We show your social security number doesn't match the information we have on file," she told me.

"There must be some mistake," I stammered. No, she informed me. They would give me a license, but I would have to get my social security number issue cleared up with the social security administration within 45 days or they would cancel my license. She took my money, sent me to another window where they took a photo of me that looked like Jabba the Hut and gave me a temporary license.

I hate crap like this. Some data entry person somewhere enters the wrong number on a form and I'm sent in to bureaucratic hell to prove who I am and when I was born.

The next day I go to the Social Security office which is conveniently open between 9 a.m. and 4 p.m. daily. This is apparently because not too many people who have jobs need to go to the Social Security office. But SSA (as they like to be called) haven't learned anything from their counterparts at DOL. Once you get through the doors with a distinctive sign instructing you to leave your firearms at home, you are hard pressed to find where to take a number until the obviously bored security guard hands you one and asks you if you are applying for a card. If you are he will show you the proper forms to fill out. If not he directs you to a chair. I was directed to a chair.

There were two windows. For 45 minutes I listened to a variety of conversations as people bombarded the clerks behind the windows with various scenarios that were much more complicated than mine seemed. I was almost embarrassed when my turn came and I told a very bored clerk that DOL had sent me over because my SS number didn't match the information they had on file. I gave her my driver's license, passport and a copy of my birth certificate. She looked puzzled that I'd come prepared and punched in a few numbers into her keyboard.

"I don't see anything wrong," she said. She turned the computer monitor so I could see it. I immediately noted that they had the wrong year of birth. SSA had me listed as four years older than I was. If I was 17 and that mistake had been made, I would have been happy as a clam. But at this point in my middle aged life, I didn't want to be nudged four years closer to the grave. I pointed out the error.

"You'll need to fill out a form requesting a change to your personal information," she informed me. I cringed at the thought of waiting another 45 minutes to hand her the completed form. She sensed my pain and told me not to take another number but to just give it to her when it was complete. I quickly filled out the form and returned it to her with my birth certificate. She made the changes and told me it would take 48 hours to work through the system. Then I could return to DOL and take another number to tell them all was right between SSA and DOL.

So, what this boils down to is that I won't be greatly disappointed if social security does disappear. Because I don't relish sitting in that same office when I turn 65 or 67 to dispute yet another missed key stroke by a data entry person.

But hey, for now, it's my birthday! And I can celebrate the fact that I gained four more years of my life.

I tell myself that every day.