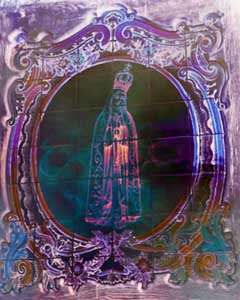 Mary, Mary, quite contrary,
How does your garden grow?
With silver bells, and cockle shells
And pretty maids all in a row.
--Nursery Rhyme

I was just messing around with an image I took of Our Lady Mary, Mother of God from the Mission of San Juan Capistrano a couple of years ago and came up with the eerie image you see above. The old nursery rhyme, "Mary, Mary, quite contrary" came to mind and as usual, I had to google to see the rhyme's origins.

Funny how the nursery rhymes we grew up with and continue to tell our children are really pretty morbid remnants of the past. The Mary of the this traditional English nursery rhyme is not Mary, Mother of God, but Mary Tudor or Bloody Mary, the daughter of King Henry VIII.

Bloody Mary, ironically was Catholic. Mary's garden is symbolic of the graveyards that were filling up during her reign with the corpses of those who dared to continue to adhere to the Protestant faith promoted during her father's time as the English king.

Pretty 'maids in a row' alluded to a device used to behead people called the "Maiden." Apparently, beheading a victim used to be quite the challenge. It could sometimes take up to 11 blows to actually sever someone's head. And, suprisingly enough, the victim often resisted and had to be chased around the scaffold. Imagine that. To solve the problem, a mechanical instrument (now known as the guillotine) called the Maiden (shortened to Maids in the Mary Mary Nursery Rhyme) was developed.

Apparently Bloody Mary was also the inspiration for "Three Blind Mice." She was the farmer's wife who chased them around with a carving knife. The three blind mice were symbolic of three noblemen who blindly adhered to the protestant faith despite Bloody Mary's persecution of non-Catholics. She didn't actually cut off their tails, but she did have them burned at the stake.

By the way, Jack and Jill going up the hill were inspired by French King Louis the XVI and Queen Marie Antoinette. Jack (King Louis) fell down and lost his crown and Jill (Marie Antoinette) came tumbling after. If you remember your French history, Louis and Antoinette were beheaded with a Guillotine.

Oh, and "Ring around the rosy," refers to the Bubonic Plague.

So, keep this post in mind the next time you are tempted to tuck your little ones in bed with a nursery rhyme.

Good topic. I'd heard the one about Ring around the rosies but not the others.

Bloody Mary's, I love them1 But then again I am a catholic...

I never thought about the Bloody Mary connection. Hail Mary!

Damn depressing really. That they would make up nursery rhymes about such horrible events.... sick!!!
Thanks for sharing this. I had no idea.