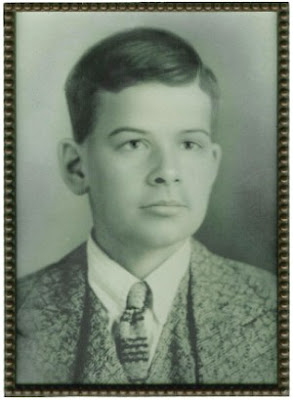 Eugene Arthur H****
"Peanuts"
1915-1992
As so many people prepare to celebrate Father's Day tomorrow, it makes me think that I am not caught up in the scramble to send dad a tie or socks. My father died Jan. 4, 1992 of stomach cancer at the age of 76.
It's not that I would have bought him a tie if he was alive today, anyway. He rarely wore ties because he worked in a warehouse for 25 years and then became a custodian at the local college when the warehouse closed down. He hated wearing ties anyway because they choked him. I inherited that sentiment (though I am forced to don the yoke of oppression more often then he did).

So, because I can't give my father anything material anymore, I decided to dedicate a blog entry to him. Because, as I grow older and have experienced the world I realize that my father, despite his faults, was truly a good and honest person.

His nickname was Peanuts. Though only a smattering of childhood friends called him that. The story goes that, back when he attended Garfield Elementary School (the same grade school I ended up going to) he had a crush on a girl. And to express his affection, he ran a mile to her home to give her a bag of peanuts.
That was my father in a nutshell (I couldn't resist).

Peanuts was born in Portland, Oregon in 1915. We don't know who his natural parents were. He spent his first five years in an orphanage. My grandparents apparently responded to an ad in the newspaper and adopted him. My grandfather -- Eugene Chester H**** -- gave my father his name. My grandmother -- Walburga Gertrude L***** -- gave him her love.

Of course we didn't know any of this until my grandmother died when my father was in his late 50s. My father had no recollection of being adopted. Relatives wrote him a letter after his adopted mother died and matter of factily asked if Wally had ever mentioned that he was adopted. It did trigger a memory that whenever his mother's relatives would visit, they referred to him as the "little Bastard." He'd always attributed it to other things.

We'll likely never know who dad's real parents were. The courts have no record of them.
Anyway, dad's new parents moved him from the Oregon Coast where they operated a tent city vacation resort to Boise, Idaho in about 1925. This is coincidentally the same year my mother was born in Boise. They were destined to meet 25 years later in 1950 and get married.

I don't know much about my father's early life. I know he liked to hunt pheasant and fish with his friends. I know he graduated from Boise High School in 1936 at age 21. Apparently during the five years he was in the orphanage, he'd suffered from a growth on his throat that affected his ability to speak. My grandparents had the problem corrected, but he didn't start school until he was nine and was always older than his classmates from then on.

My father's hair was gray by the time he graduated high school. It was white by the time he was in his 30s. This made him always appear even older than he was.

When the war broke out, my father was drafted. Rather than enter the army, he immediately went to the local navy recruiter and enlisted before the draft board actually called him. He ended up being assigned to a sub tender and was a Torpedoesman First Class. His entire time in the Navy was spent repairing the motors on dummy Torpedoes. He never saw action. The most exotic place he saw was the Panama Canal. The only real skill he brought out of his time in the service was how to swear.

When he got out of the Navy, he returned home and started working for the Salt Lake Hardware Company. He became a supervisor in their warehouse. For recreation, he still hunted, fished and of all things, roller skated. That's where he met my mother. She was 25 and he was 35 and still living at home. She worked at a bank.

My mother recalls when my father proposed, he asked her, "Would you like to get married, and things?" She always laughed about what the "and things," might be.

As I've chronicled in another blog entry, my father built a house right next door to my grandparents house on property they gave him. In a year or so my brother Ted Eugene H**** was born. My other brother Dan Everett H**** was born in 1954 and I, Tim Edwin H****, was born in 1958.

My father was 43 by the time I was born. His hair was completely white. I remember working on the roof of my grandmother's garage once and an old man went by and hollered up that I was a good boy for helping my grandpa. Dad was pissed. But he refused to dye his hair for fear of what the guys at work would say.
Every year, my father would use his two weeks vacation to take us camping at one of two of his favorite places in the mountains. He taught my brothers and I to fish. He taught my oldest brother to hunt. He lost the stomach for killing things by the time I was of age.

When my father was 55, the warehouse closed. I remember his panic at being out of work at a time most men could see retirement in the rear view mirror. He quickly took a job with the state at the local college as a custodian. As with his other job, he did it with pride and taught me to respect every one's profession, no matter how society tends to view it. He worked for years in the men's dorm that housed most of the Boise State Broncos football team. They ended up adopting him.

My father retired ten years later. His passion at that time continued to be the Boise State Broncos football team. He would mow lawns in the neighborhood to save money to buy his season tickets. And everyday when they practised he would ride his old Schwinn bike to Bronco Stadium to watch them. He would carry hard candy in his jacket pocket and throw it to the football players. That provided him with a new nickname. Peanuts became the "The Candyman." A local news program even did a segment on him.

My father's other passion was the search for buried treasure. He would spend his evenings poring over books and magazines dedicated to lost treasures of the west. He would make weekly trips to the library. I credit him for fostering my love of books.

Finally, on a trip home to Boise after I'd gone away to Seattle to finish college, I noticed my father's finger was bleeding. I asked him what he'd done and he looked puzzled. When I left to go back to Seattle, I urged my mother to get him to a doctor (not an easy request since they were Christian Scientists). A week later, she called me and said a doctor had diagnosed the problem with his finger as a tumor. They amputated it and did tests. Cancer had spread through his body, but was concentrated in his stomach.

I flew back to Boise. It was Christmas of 1991. Dad was bedridden and in constant pain. I helped my mom take care of him those two weeks. I'll always remember holding him he cried about how bad the pain was. And I was reminded of the times he'd held me in the same way and comforted me over some scrapped knee or cut.

My father died at home in January of 1992. He was cremated. At his own request, there was no funeral. That summer, my brothers and I drove with my mother and my nephew Brendan up into the mountains above Boise to the Middle Fork of the Boise River to a spot my father used to love to fish. Brendan couldn't have been more than 3 or 4 years old. My brother Dan carried him on his shoulders as we hiked down a trail to the river bank. And that's where I said goodbye to my father.

But, even as I write this, I can picture myself waiting in our front yard for him to drive up in his old 1936 Chevy. He'd step out, hand me his empty lunch box to carry in the house, hold my hand and ask what was for dinner.

Excellent story Tim. Now one of my favorites. Well written and very descriptive.
You father certainly sounds like a real character.
It is wonderful that you have such great memories of him.

Thanks Shandi and Lights. It's hard to condense someone's life into 1000 words or less. And I'm ashamed to admit, there is so much I don't know. Pity I didn't take the time when he was alive to find out more.