A Day in the Life

--Lennon/McCartney (though if Paul was dead, he couldn't have help write the lyrics)
Sgt. Pepper's Lonely Hearts Club Band

Lights in the Wake helped fire a synapse path in my brain regarding rumors that began spreading in 1969 that Paul McCartney of the Beatles had died and been replaced by a lookalike. I found a Web site -- I Buried Paul - Turn Me On, Dead Man -- that provides you everything you every wanted to know about the rumor.

I've always been a Beatles fan. Check out my Sept. 2004 blog entry (All I am saying) if you don't believe me.

Anyway, I do remember scrutinizing all of my Beatles albums with my 5th grade buddies when the rumors about Paul started. The conspiracy theory was that the Beatles had planted these clues on their albums after their agent covered up Paul's death.

I must have played the little bit at the end of Strawberry Fields a hundred times (seems like Forever...ha, ha) to listen to John saying what we thought was, "I buried Paul." Later, in an interview, I heard him explain that he was actually saying, "Cranberry sauce."

Not as intriguing but equally unexplainable.

On the Magical Mystery Tour album cover, it was reported that Paul was the one in the walrus costume. A walrus was supposedly a symbol of death. However, it was actually John wearing the walrus costume, goo, goo, ga choo. Eerie, though, that years later he would be assassinated.

I interpreted all of the clues in the Sgt. Pepper's Lonely Heart's Club Band album. Paul was wearing a band uniform that had a patch with the initials: OPD. The Paul is dead theorists said it stood for "Officially Pronounced Dead." Paul later said it stood for "Ontario Police Department." 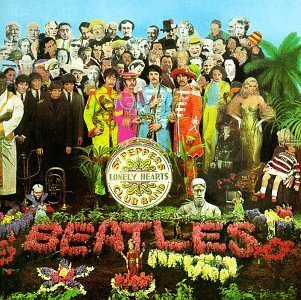 If you look closely at the album cover, you'll see a hand raised over Paul's head in a salute to a fallen comrade. The flowers spelling out "BEATLES" in the foreground are supposed to be funeral bouquets.

And, most of the images in the background of the album were famous dead people. But the most intiguing thing about that cover after my revelation to the world that I am Edgar Allan Poe reincarnated is the face almost "dead" center of the top of the album, straight up from Ringo...go ahead look. Yes, it's Edgar Allan Poe. Is the hair standing up on the back of your neck, too?

Thanks, Lights in the Wake, for adding yet more evidence to my growing believe that I was Edgar Allan Poe.
Posted by Time at 12:35 PM

Glad to be of service. Incidentally, according to the radio show I taped, the guy who replaced Paul would have been "the one and only Billy Spears" as introduced on Sgt. Pepper. So I guess he should have gotten the writting credit.

nothing bring happy joyful times like a warm gun eh what?

I think it was "the one and only Billy Shears" but I get your point.

Yes, happiness is a warm gun, but I dig a pony.