A rose by any other name... 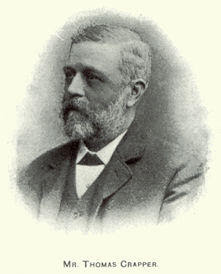 Myth: The word "crap" is derived from Thomas Crapper's name.

The origin of crap is still being debated. Possible sources include the Dutch Krappe; Low German krape meaning a vile and inedible fish; Middle English crappy, and Thomas Crapper. Where crap is derived from Crapper, it is by a process know as, pardon the pun, a back formation. The World War I doughboys passing through England brought together Crapper's name and the toilet. They saw the words T. Crapper-Chelsea printed on the tanks and coined the slang "crapper" meaning toilet.

The legend of Thomas Crapper takes its flavor from the real man's life. While Crapper may not be the inventor of the product he is most often associated with, his contribution to England's plumbing history is significant. And the man's legend, well, it lives on despite all proof to contrary.

--Excerpt from Plumbing and Mechanical - June 1993

I particularily like the line that "The legend of Thomas Crapper takes its flavor from the real man's life."

As usual, a simple Google search turned up a veritable plethora of material dedicated to the debate over whether or not Thomas Crapper

invented the flush toilet. For all intents and purposes, he did not. And as you can see from the blurb above, we can't really even attribute the word "crap" to the man. What we do know is that Thomas Crapper was a plumber and he did market a version of the flush toilet that bears his name to this day. There is even a http://www.thomas-crapper.com/ where you can buy all the Crappers you've ever dreamed of.

More important than the fascination people seem to have about Thomas Crapper is the amazing amount of reference materials out there about toilets. Judging from the number of toilet experts out there, the British seem to be particularily obsessed about the mechanics of waste removal. A case in point is the book Thunder, Flush and Thomas Crapper by Adam Hart-Davis.

Adam's book is truly an A to Zed (as the British say) guide to all things related to bathroom functions. There's even an entry titled, Zen and the Art of Excretion. If you are the type of person who likes to read on the John, this would be a great book for you. For example, check out this definition of crap:


The Oxford English Dictionary says that crap means the husk of grain or chaff, a name of some plants---buckwheat and rye-grass---the residue formed from boiling fat, the dregs of beer or ale, money and so on. There is no mention of either rubbish or shit. The second edition admits, as the seventh meaning, excrement, defecation (coarse slang), with a first use in 1898, and the verb `to crap' meaning to defecate, in use since 1846. In the US, `crapper' means lavatory; one theory is that the word was brought back by American troops serving in Britain during the First World War who were impressed by Thomas Crapper's products. But if the word `crap' was used to mean defecate as far back as 1846, Thomas Crapper cannot have been responsible, since he was only ten years old at the time.

Not to be outdone by the British, we Americans have our share of toilet tomes out there. There's the Official Outhouses Tour of America Web site. They proudly proclaim, "Outhouse Tour Forms in the Rear!" Okay, you've had to wade through all of this crap because I promised to share the new poem I've been working on about Thomas Crapper. I suppose it could be a song as well. It's just something that came to me out of the blue...or the crap in my mind. Anyway, here goes:

ODE TO THOMAS CRAPPER
If I was Thomas Crapper, I'd probably come in a plain brown wrapper,
Because who would want to go through life, being referred to as a Crapper?
He didn't invent the toilet, after all,
But who'd want to be thought of every time nature calls?
Every king has his throne, and Thomas Crapper built his own,
It wasn't very plush, but you could count on it to flush.
He was a plumber to the crown, so why do people put him down?
If he didn't install the royal Loo, the palace would be in deep doo-doo.
If you give it a lot of thought, at least Thomas decided to shit and get off the pot.
So here's to Thomas Crapper,
If he'd been born today, he' d be a Rapper.
This poem may make you yawn,
But what do you expect from verse that's about a John?
The End (get it?)

Maybe I should have written more about the Gaboon Viper, instead. Sigh.
Posted by Time at 9:32 AM

Ok Tim....I couldn't stand your disappointment at not getting a single comment on this post so allow me to rectify that right now. For all that research and virtual wealth of information you provided you deserved at least one :)

And here's another. I have a postcard sent by a Crapper.