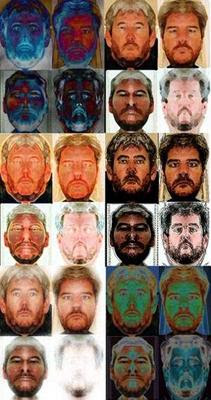 Here's a table showing how the left and right brains function:

An interesting way to see firsthand what your left- and righthand selves look like is to combine images of your left face and right face together with mirror images of themselves. The results can be kind of disturbing as you can see by the images above created by my right brain. My right brain thought it was kind of cool, My left brain thought it was all a waste of time.

Considering all of us are being pulled around in two different directions most of the time, it is a wonder anything gets done. This is why one side of our brain usually dominates. More often than not, it is the left brain that calls the shots.

Experiments have shown that our right brains are most prominent in us as children before we enter school. Then, because our educational systems are geared towards more left brain skills such as math, logic and language then drawing and daydreaming, our left brains start to take over. Only ten percent of the population will rank in the "highly creative" category by age 7. By adulthood only two percent of the population remain highly creative.

Makes you think. But keep in mind that only one side of the brain can control consciousness at a time. This presents an interesting dilemma. It means our brain halves are constantly vying for control of what we are thinking. If you really want to get in touch with your right brain, you have to put the left brain to sleep with meditation or reality television. This is because the left brain gets bored easily without lots of stimulation. Once the left brain dozes off, the right brain starts playing and giving us great insight into things like the meaning of life. Bummer is, the left brain quickly wakes up and tells you it is all a load of rubbish.

Don't tell my left brain, but I think I like my right brain better. It likes to do fun stuff like bungee jump and ride roller coasters. Unfortunately it also likes to watch television programs like Bridezilla and the Real Gilligan's Island. I never said my right brain had any taste.

I think that my right brain and left brain have been fighting...? With the right side winning. Fantasy based is kicking reality based ass. It's too crazy in here and I can't even blog about it.

Nothing wrong with fantasy based reality. And remember, blogs are like jello. There's also room for more.

Left brain response: This post was well researched and informative.

My gut reaction, Lights, is that you aren't always in your right mind.