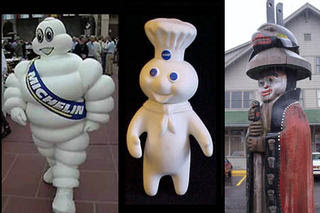 I tend to think that there are definite patterns that repeat themselves in our universe. Take fibonacci numbers, some say all nature corresponds to a mathematical formula expressed by a numbering system based on the rate at which rabbits multiply. Oddly enough, bunny rabbits seem to pop up in my blog a great deal. This is a pattern.

The above composite photograph shows a recent pattern I discovered when browsing through some photographs from an Alaskan cruise Tess and I took a year ago. I was struck by the totem figure's resemblance to the Michelin Man and the Pillsbury Doughboy. I was also going to include the Stay Puffed Marshmallow man, but you can't find any decent photos of him on the Web except for video captures from Ghostbusters.

I wonder sometimes if the poor nutjobs we see on the street muttering and pacing off stretches of the sidewalk aren't really tuned into some elabortate pattern that "sane" people can't discern. I suppose "nutjobs" isn't a very nice way to refer to these people. I imagine they are more accurately referred to as suffering from:

schiz·o·phre·ni·a
n. My limited knowledge of schizophrenia (enhanced here by the good people at www.answer.com) would lead me to believe that schizophrenics simply are tuning into a different "test pattern" then the rest of us. But I must admit, answer.com's definition of schizophrenia could be applied to a great many of the people I deal with on any given day.

But again, I digress.

I am fascinated by the patterns I see in things. For example, I am fascinated that on a daily basis, if you pay attention, you will see at least one reference to Elvis. I know I do.

Or, say you are looking for a new car. And you have decided you really want a Volkswagon Beetle (I'm not sure why you would decide this, but there is no accounting for taste). Odds are, once you decide to buy a Volkswagon Beetle, you will see them everywhere.

I for one, am amazed by this. But then again I'm also amazed that Dog the Bounty Hunter is coming back for another season.

"...some say all nature corresponds to a mathematical formula expressed by a numbering system based on the rate at which rabbits multiply."

They would only be half right. Models are an approximation of the physical universe. Most of the time we can only calculate to a number of decimal places to be "close enough." For example: Pi (3.14...) can not relate to any circle in the real universe. Even if we machine a metal cylinder to within an atom's tolerance we'll still have the bumpy texture created by the cylinder's individual particles ruining the perfect circle.

We seem to live in a fuzzy universe that teases us with things like the fibonacci set then blows us away when we look too closely. It's overwhelming.

My wife and I saw a lot of the same make/model of vehicle driving around after we decided to buy one. I think we made the drivers nervous because we would both crane our necks to watch them drive by. Our new addition to the family is ugly but I like it very much.

Things do resemble other things but I think that it is so that we except the new because it seems familiar.

I never noticed how many cars there were like mine till I got it. This happens evertime I get a different car. A friend of mine got one of those new station wagons (I think they're ugly) and now I see them all over. (Are those things only in black or white?)
As far as elvis...there is only one place that I see elvis...? Not that It's about elvis...He talks about so more than just that.

If your new car is a Volkswagon Beetle, I appologize. They are truly spectacular cars.

Very good point. I never really thought about it that way. Our brains could very well create patterns to help us cope.

And Elvis is everywhere (not just Tim-Elvis). You just have to look. :)

Speaking of bunnies...(well, you brought it up, it's not my fault).

I've been thinking about what might have happened if Schroedinger had used a rabbit instead of a cat. I've decided that there wouldn't have been much difference. The rabbit would still be both dead and alive simultaneously, except that if it were alive there'd be 12 of them by the time you checked.

There is a belief out there that just by thinking of a particuliar pattern, you draw it to you (some sort of supernatural/psychic thing). Lights and I once did an experiment to test the theory. When going on a trip we each chose a random object out of thin air, voiced the chosen object, and then went about our trip paying attention to see if said object crossed our path. I think I chose a nutcracker and he a moose. If I recall correctly, I found a nutcracker.
Anyway... it's a fun little game to play. Right now.... I'm thinking.... hmmmmmmm..... pink elephant. Let's see if that pops up anywhere.

Interesting twist on the Shroedinger experiment, but we know what happens when the rabbit dies, don't we?

And Shandi, I can't believe Lights didn't pick a rabbit instead of a moose. He has this obsession with them.

Good luck with the Pink Elephant. Frangelico could help :)