The future is tomorrow's past 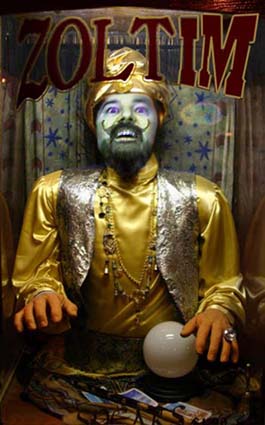 That title is just trite enough to make it on a bumpersticker. I'm not really big in predictions of the future anyway. Being a proponent of the theory that we live in a universe of many universes in which an infinite number of realities are taking place simultaneously, I don't think predicting the future makes sense. Even if you could predict the future, who is to say it would be for the world you are living in at the time.

This is not to say that I think that what happens in the future is random. I think you can have a pretty good idea what is going to happen next based on what happened last. We build our lives progressively based on what actions we've taken before. So, this argues for planning for the future but accepting that we can't really control it completely.

I suppose this discussion is a pretty good follow up to my blog about discovering the meaning of life. There was one section in the meaning of life Web site that addressed the question of why bad stuff happens to "good" people. You could simply say, "shit happens" and shrug it off or you could start looking for meaning behind it. Someone inevitably says, "things happen for a reason." I would humbly suggest that there is a reason why things happen, but they don't necessarily happen for a reason.

For example, several years ago an acquaintance of mine's brother was sitting at a stop light in downtown Seattle in a Volkswagon bug. Before the light changed a Chevy sedan crashed through the side of a fifth floor parking garage and fell on the Volkswagon bug, killing the unfortunately driver. The reason the Chevy sedan flew off the parking garage was that the driver had a heart attack and lost control of the car. A few seconds earlier or later and the Volkswagon would likely have been on it's way and the driver would have been unaware of the tragedy.

The point: it didn't happen for a reason. There was no moral judgement being cast. As far as we know, neither driver was a bad person. Oh, perhaps the person who had the heart attack could have taken better care of themselves. Or maybe the driver of the Volkswagon could have chosen to take the bus, but there was no supernatural malice involved.

It makes you think, though. Despite your best planning efforts for the future, you never know when a car (or a house as the "wicked" witch of the East discovered) will fall on you and change your future. But you can't plan for the unexepected or you would be afraid to leave your house. And even if you never left your house, who is to say it won't be the house that falls on the wicked witch?

So to use as many cliches as I can, that's life. You play the cards you are dealt. You got to know when to hold and know when to fold. If life gives you lemons, squeeze them. Or something like that.

The important thing is to keep going. Then again, we are all going to die eventually. But what is death? Death, my friends, is the topic of another blog entry...in the future.
Posted by Time at 7:09 AM

No disrespect intended to your deceased acquainance but that's actually not a bad way to go. Everyone's gotta die sometime so going out relatively quickly and memorably as this fellow did, is not such a bad thing. Although I'd bet he might disagree.

And the way I heard it was: "When life gives you lemons, kick life in the balls and steal life's wallet while it's down."

You know, I knew you were going to say that.

Going quick would have it's advantages, except you wouldn't be able to say goodbye.

lol...you two are wonderful. You always make me laugh. Lemon aid anyone? :)

Lights does have a way of putting things in perspective for us all. Glad we could make you laugh in the process. :)

Unfortunately, Tim-Elvis and Lights in the wake doesn't have the same resonance as some of the great comedy duos of the past. Martin and Lewis, Abbott and Costello, Laurel and Hardy, and Captain and Tenile come to mind. I guess what I'm saying is that we can't expect a road tour any time soon. But I will second T-E in saying that I'm glad you enjoy it. I also feel compelled to point out that Tim does all of the work while I just swoop in to deliver the occasional one-liner. (Or, twenty-liner, in this case).