The beast in me...or who let the dogs out? 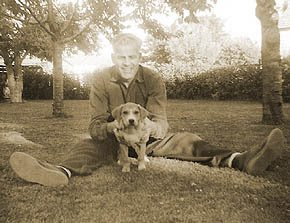 "You ain't nuthin' but a Hounddog."
--Elvis Presley, Hounddog They say every dog has his day. And on sunday it will be the beginning of the Chinese Zodiac's Year of the Dog. I was born in the Year of the Dog. That would make this my year. And here is what they say about us Dogs:

"People born n the Year of the Dog possess the best traits of human nature. They have a deep sense of loyalty, are honest, and inspire other people's confidence because they know how to keep secrets. But Dog People are somewhat selfish, terribly stubborn, and eccentric. They care little for wealth, yet somehow always seem to have money. They can be cold emotionally and sometimes distant at parties. They can find fault with many things and are noted for their sharp tongues.Dog people make good leaders. They are compatible with those born in the Years of the Horse, Tiger, and Rabbit."

I find it ironic that I was born in the year of the dog. I consider myself more of a cat person. Not that I don't like dogs. The photo at the top of this blog is the first dog I can remember. His name was Lucky. He was shown here as a puppy with my father before I was born. He was full grown by the time I was born. 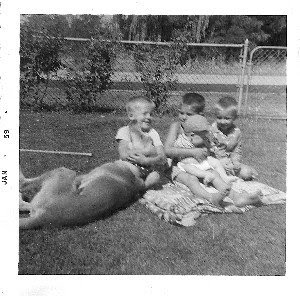 The first thing he did when mom brought me home from the hospital was bite me. The photo above shows my brother Dan trying to get Lucky to bite me again while my other brother Ted holds me. Lucky ended up going away to live on a farm by the time I was a toddler (at least that is where my mother said he ended up).

I still like dogs. This is a photo of me with my dog Shep. He and I grew up together. Both of us managed to avoid being sent to a farm to live (though my mother threatened this quite often...to this day when I hear Clint Eastwood's "Do you feel Lucky" line I break out in a sweat). 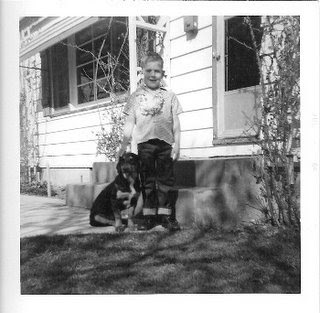 I love animals in general (not in the Biblical sense...so let's just cut that little rumor off right here). But I will always be partial towards cats. Cats just have this nasty quality you have to respect. When a cat is pissed at you they know exactly what to do to express it. My ol' orange tabby Cuervo, god rest his soul, expressed himself by spraying. Once he backed up to my Elvis shrine while I was sitting in the recliner watching television and let the King have it. Another time he peed in my VCR. These are not random acts, my friends.

I find the whole Chinese Zodiac versus the other Zodiac kind of confusing. In one I'm a dog and in the other I'm a fish. Not that I'm dissing on either Zodiac. I would just like some clarity on how I'm supposed to act based upon when I was born.

Oh don't give me that free will crap. Do you think I would mow my lawn if free will existed? I think not.

Okay, I'm just yanking your chain. I studied astrology for a few years back in the "New Age" phase. A good astrologer would not emphasize a chart as constraining a person as much as telling them what their options are. For example a dog can either hunt or lie on the porch sleeping. I'm telling you, this dog don't hunt. He is a pointer. He likes to sit in a chair with his feet up and point at life going by on the television.

Don't you just love having thousands of years of astrological knowledge boiled down to "this dog don't hunt?" I can't help it. I'm a simple man born in the Year of the Dog when the sun and the moon were in Pisces. You can't flea from the truth.

Lesse, if I remember correctly, I was born in the year of the goat. Figures. And yes, I also agree that whatever it says about me is no where near to what I percieve as the truth as my regular discription as a Cancer.
I have both the cats and a dog. The cats do not give me much reason to feel warm and fuzzy towards them. The dog has alot more personality, and being a incredibly smart creature, respects me as the Alpha male, sucking up like he should to get those treats. And let me tell ya, this is one treat whore if you ever saw one!
One day I hope to prove that humans have been enslaved by another species that came to Earth a long time ago and really like it here. They are called cats. What else explains feeding creatures that you secretly dispise?

I adore cats for that same reason. You call a dog and he comes. You call a cat... he says "leave a message, I'll get back to ya."

I was born in the year of the rooster. What the heck that means... who knows?

Well leave it to me to bring out the cat contingent in the Year of the Dog. :)

I'm not sure what being born in the Year of the Rooster means, but I'm sure it is something to crow about.

I crack me up.

well I for one adore cats.. they have just the right attitude...

old joke - feed a dog and he says "I am so lucky my owner is GOD"
feed a cat he says.. "the human is so lucky he is owned by a GOD".. great attitude..

Appearently I am a Dragon:
People born in the Year of the Dragon are healthy, energetic, excitable, short-tempered, and stubborn. They are also honest, sensitive, brave, and they inspire confidence and trust. Dragon people are the most eccentric of any in the eastern zodiac. They neither borrow money nor make flowery speeches, but they tend to be soft-hearted which sometimes gives others an advantage over them. They are compatible with Rats, Snakes, Monkeys, and Roosters

Forget about what you just read, if any of you want to loan me money you just speak right up.

That's Grrrreat that you are a Tiger. Very appropriate.

Tess is a Dragon. You don't have to tell me about the temper part. I'll consider your load request as soon as you take advantage of new, lower interest rates and refinance your home. Just send me your account information and I'll start processing it.

I am a rooster. But I love dogs and cats. But my cat does not love my dogs and the dogs are scared of her.

Well Poody, that adds a whole new wrinkle to the mix. You are a bird sign who loves dogs and cats. It just gets more and more curious.