Forgive me my trespasses 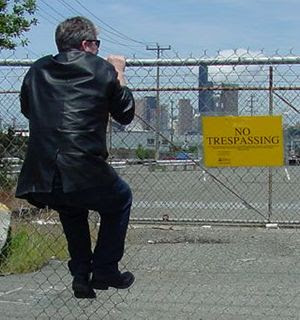 Signs, signs, everywhere the signs.
Blocking up the scenery, breaking my mind
Do this, don't do that, can't you read the signs?
--Five Man Electrical Band

I don't like signs. Nothing makes me want to be a contrarian more than a stupid sign telling me not to do something.

Oh, I'll "obey" stop signs and other practical traffic signs. But as a general rule, I do whatever a sign tells me not to.

Homemade signs are the worst. They reek of control freak.

I have to confess, that, in my younger days, I was guilty of creating a few useless signs. It started when I worked in the Boise Public Library. I was maybe 18-years old and working in the circulation department as a clerk. This essentially translated to robot who checks book in and out all day with shifts at the dreaded window where we issued library cards.

That's where my homemade signs came in. I got sick of people asking me what they needed to do to get a library card (essentially fill out an application and show some form of current identification). So, I made the assumption that people wishing to apply for a library card could read and would therefore benefit from a sign explaining how to get one.

It was one of those life lessons that nudged me out of youthful optimism and into the adult pessimistic view that there is really no hope for humanity. I carefully stenciled a posterboard sign with very detailed instruction on how to fill out an application and what forms of identification were acceptable.

I think you can see where this is going. I'd sit there at a computer terminal at the application window and people would approach. They'd look up at the sign and then lean in to me and ask, "How can I get a library card?" I'd lean out of the window and point at the sign and then hand them an application. In most cases they'd stare at the instructions on the sign in perplexed silence like a baboon that had been handed a jar with a lid on it that had an orange in it. Then they'd lean in the window and ask me again, "How can I get a library card?"

So I developed this theory: Signs are stupid because people are stupid.

I know this is a gross generalization, but it saves time having to judge things on a case by case basis. And the laws of probability will eventually support my theory anyway.

The end result of my disillusionment with signs was that I began to distain and ignore them myself. Part of it is out of a desire to torture the people who created them the way I was tortured at the Boise Public Library. So if I go to a restaurant that has a sign that says, CASH ONLY, NO CHECKS OR CREDIT CARDS, I just have to ask, "Do you take checks?"

One of my favorite pasttimes is to go into a dollar store and repeatedly ask the clerks how much an item costs. It is also kind of fun to go to a McDonalds and ask how much each item on the dollar menu costs. I'll also repeatedly punch the button on an elevator with an OUT OF ORDER sign on it. I love to go through the 15 items or less line at a grocery line with a cart filled to the brim with items. And god help any place that puts a sign on a toilet that says DO NOT FLUSH.

I'm not alone in doing these things. I see it all the time. I'm unfortunately, usually the person behind such people in a line at a McDonalds or a grocery store.

So what it all boils down to is that people ignore signs. Even the religious nuts standing on the corner asking the lord to give them a sign wouldn't read it if he/she did.

Yea, we have a very detailed and prominant sign outside the door of our CCU that clearly states our visting hours, yet they go for the phone, and ask if they can come in.
I'm sure it's because everybody is special, and whatever is written on signs couldn't possibly apply to them. It only makes it that much harder to be nice to people.

welllllllll Tim Elvis that one gave me a nice lil giggle.. maybe it explains why no one can find me anymore in my new office..... they don't read the sign! no wonder i am getting so much work done.. and why it has been so quiet in my lil corner of the world ... (big cheeky grin)

the michael,
That is exactly the mentality I'm talking about. Apparently it is human nature to think signs apply to everyone but them.

Morningstar, See, sometimes the whole sign phenomenon can work to your advantage.

You are so funny!! I can actually see you doing stuff like that.

My favorite pasttime is to flash my lights at oncoming traffic on the highway (nighttime), then check in the rear view mirror to see how many people touch their breaks because they assume I was flashing my lights because I just passed a cop on their side of the road. Did I just confess that?? My husband says I am ignorant but it cracks me up.

I think Tesla covered the song, but I may have misread the signs. :)