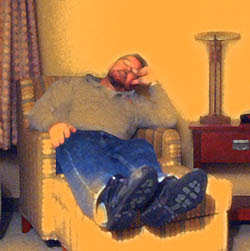 I don't normally watch award programs, but Monday night was a slow night on satellite and we'd already watched our DVD of the March of Penquins. So I found myself cooking dinner while watching the pre-awards show special about stars arriving and making and entrance on the red carpet. I discovered that Johnny Depp perfected his Stepford Wife-like Willa Wonka voice while playing Barbies with his daughter. Still I did not turn away.

I must admit that I don't know who the Hollywood Foreign Press Association are or why they qualify to give out awards. But I suppose their opinions are probably just about as good as polling people as they walk out of a Wal-Mart. Except the Wal-Mart crowd probably wouldn't have voted for anyone who had a funny accent (who would have thought that Johnathon Rhys-Meyers, the actor who played Elvis in the latest mini-series and won best actor in a mini-series was Irish).

To be honest with you, I spent most the Golden Globe Awards playing with my Gameboy. I did cheer when Steve Carell won best actor in a television musical or comedy for the Office. I also watched with mild bemusement while Clint Eastwood handed out the best drama award for a movie to Brokeback Mountain, a story about gay cowboys. I'll bet that made his day.

I do agree with the critics. This Grecian urn look for evening gowns has got to stop and Mariah Carey needs to lay off the linquine. Oh, and I think Harrison Ford was hitting the sauce a bit too much when he made his presentation. And whoever wrote the catchy opening song for the Golden Globes is a very sick person.

So, that's my view of the Golden Globe Awards. I can't wait for the Oscars. Good night and good luck.
Posted by Time at 7:35 AM

I have never watched an award show. I do not have the patience for that. The bigger question is what were you playing on your gameboy and did you win?

Are you telling me you don't care what Pamela Anderson was wearing?

And does anyone ever win when they play on a Gameboy? :)

like cherish i never watch award shows either... mind you.. i rarely if ever watch TV....
oh yeah and i don't read newspapers either... so i have it all figured out now...
i will come to Dizgraceland to get the low down on the award shows and go to The Michael for the news headlines and editorials.. and wow..no one at work will know i am uninformed.. right?? (cheeky grin)

Welcome, ladies and gentlemen, to the First Annual Blind Blogger Awards, brought to you by Walmart, employing blind people in undisclosed locations since 2005, and by Target, whose employees can see but not much else. Hello, I'm you're host, THE Michael. You may have seen me blog on such world famous blogs as Madness, Musings, and Melancholy, and Adventures of an Alter Ego. Now, coming down the aisle is......huh?.....TIM? Tim, take off those damn glasses, this is for blind people, you shameless........

Morningstar, I will try not to disappoint you and provide the trashy side to current affairs.