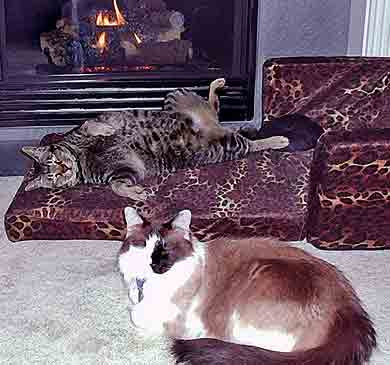 The East Coast of the United States may be basking in balmy, spring-like weather, but here in the Great Pacific Northwest, our winter of discontent continues. In short, everything is frozen. But our cats remain blissfully oblivious to the frozen tundra outside the front door. They truly know how to relax.

Keliki, the big ol' boy sprawled out on his leopard print lounger (Tess' purchase) wrote the book on relaxing. Keliki was born in Jakarta, Indonesia. Tess was teaching there several years ago and found him on a golf course when he was a kitten and adopted him. He immigrated to the United States in 2001 and has grown fat and sassy in the land of milk and honey.

Lahaina, the one with the Phantom of the Opera mask, was born in Puyallup, Washington. She has 13 toes total on her front paws. This is known as polydactyl or "many toed." Her paws are like baseball mitts. Although she is laying around like a normal cat in this photo, she also spends a great deal of time sprawled out on her back with her legs stretched out. I think she picked this up from Keliki.

I like to watch the cats kick back. They don't worry about much other than where to sleep next, when to eat and where to cough up a hairball. I, on the other hand, have to worry about getting up in the morning, driving on roads that look like a Zamboni proceeded me and going to work.

Sometimes I wish I was a cat. But then again, Keliki had his testicles removed by an Indonesian Vet named Dr. Daisy.

Email ThisBlogThis!Share to TwitterShare to FacebookShare to Pinterest
Labels: Pets

sometimes I think one of the great joys of having critters is enabling them to live the life of pleasure and comfort that I wish I had. I loved making life as comfie as possible for my cats, and for Jake, - well, it's not comfort for him, it's about really healthy food and a lot of interesting stuff to keep him stimulated.
sometimes I wish that repeatedly throwing his toys down the hall so he can run after them weren't quite so interesting.

Yes, we do live vicariously through our animal pals. I'm just glad the cats finally stopped messing with the Elvis tree (other than upchucking on the tree skirt that the mini Graceland sat on).

Wow!!! Keliki looks so American. I never would have guessed.

My cats are also enjoying the warmth at home. Our temp hit a 10 year low this morning, 32. We just might get a few flakes (other than lights and I).

Shandi,
He has adapted well. But if you saw him in person, you can tell that there is something not quite right about the boy. Plus he has this funky hook like tail that he is very sensitive about.

Only 32? We would be in shorts if it was 32. But I'm glad you and Lights are finally getting some company, flaky or not. :)

You're the best Tim ID I've ever run across. Well, except for this one dude I used to know in college. But you're definitely the best one I've met since then. Sorry about the weather up there. Go Seahawks!

Neither of these cats appears to be named after an alcoholic beverage product, as far as I can tell. I thought we had a tradition going here. Should we blame your wife for not yet having met you when she came up with rogue names for the cats? That must be the reason.

Glad to see you can look on the bright side. About the neutering thing.

Lights,
I'm concerned about you. Perhaps the cold spell in Bakersfield is taking its toll. Don't take the El Nino effect too lightly. It will break your heart. DA HAWKs will beat DA BEARS!

Kristy, Tess named Keliki before she met me. Lahaina was named after one of our favorite spots in Hawaii where I believe we did have a drink or two. So there you go. And there is nothing like the thought of being neutered to put everything in perspective.

Love the name Keliki and love that your cats have pillows covered with animal print. For some reason, that cracked me up.

Thanks Anna, Keliki is named after a village in Bali. Is about the size of that village now, too. The leopard print cat bed takes some getting used to...for me at least. The cats are quite happy with it.

smiles... they are so cute. Looks like they are living a real rough life there Tim.