Eye of the beholder 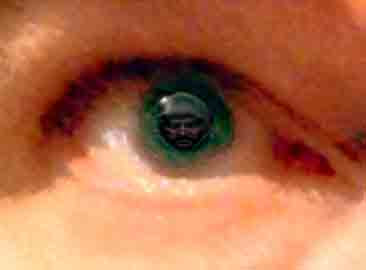 "I see," said the blindman as he picked up his hammer and saw.

I'm of the opinion that most people look at the world but don't see very much. Ironically, that is an observation.

I'm probably just as guilty of not seeing as everyone else. I work in downtown Seattle. Although not a big city by New York standards, it is a city. And I am able to walk by a homeless person sitting on the sidewalk without seeing them just as well as any New Yorker.

It is a defense mechanism. If I see poverty and suffering I will feel this twinge of guilt that I should be doing something about it. Handing the homeless person the 73 cents change from my Grande Americano with room I had at Starbucks never seems to be enough of a payment to keep the guilt at bay.

But this blog entry wasn't really intended be about my liberal anst over poverty in America. It is about not seeing. It is about looking in the mirror, sucking in the belly and imagining you aren't really overweight. It's about wearing plaid or a pink tuxedo and thinking you are styling. It's about lipstick applied a few too many hairs above the lip line and thinking you are ready for Vogue. It's about baggy pants hanging way too far below the crotch level exposing boxers that were never intended to see the light of day and thinking you are fly.
Open your eyes people! The emperor really isn't wearing any clothes. No one looks good in a Speedo and men look like idiots in kilts.
Eye there's the rub.
Posted by Time at 9:30 PM

When I look in the mirror I choose not to see my flaws. It makes it easier to get through the day. The image I have in my mind is so much better anyway. I find that it helps to squint a bit.

Speaking of rub and kilts - wool on my sensitive bits? No thanks. Perhaps if the kilt has a soft lining inside.

I've found that as I age I get in the bad habit of observing less. Since I have years of observation stored up I can more easily characterize a familiar object/person without close examination.

Ethical or not it's easier to classify a mendicant into a framework of pre-considered observations and reactions than to examine them closely.

Shandi,
I think the operative word here is "choose." Everything we see is filtered through the brains. I think it is perfectly reasonable to consciously choose what we want to see. But I do think we must first see the light before we choose to shut it out.

And I thought you were more into men in tutu's than kilts :)

R. I take it you would be open to a fur lined kilt sans undergarments. Okay I suppose in the privacy of your own home.

One blogger comments...
" You showed a lot of guts writing about that subject."

The Whitesnake says....
" Leave it out, the only guts showing is what's hanging over his trousers!"

When you look in the mirror and you start seeing all sorts of things like wrinkles hairs growing in places that you never thought possible etc etc..

Then you are getting old but that doesn't mean ya can't still wear your flairs and orange shirt.....

When I was a teenager I was on a constant energy-sucking quest to see it all. My first sexual experience had me opening my eyes as wide as I could (in the dark) to see what I could see. My first concert left me with watery eyes because I swear I did not blink for fear I would miss something.

Now that I am older I find that I observe just as much (if not more), but I think less of it - and am less surprised. I have become desensitized somewhat to my surroundings and it has to be a really bizarre thing going on for me to stop what I am doing to stare. Unless of course, it's a guy in a kilt. I open my eyes wide for that bit of business in the hopes that a supreme wind will come along and kiss his hem just so and provide me with a glimpse of his Scottish ancestry.....

I beg your pardon, but have you ever seen Johnny Urquhart in a kilt? It's a sight to behold.

"I see," said the blind man to the deaf mute.

Contrary to popular mythology a Scottsman is not naked under his kilt. He's wearing a speedo. Very old and respected tradition.

Whitesnake,
You showed a lot of guts commenting on this subject.

Miss Bliss,
Always remember the eyes have it.

Kristy, I can honestly say that I have never seen Johnny Urquhart in a kilt. Nor would I ever want to.

Lights, Stop you are kilting me.