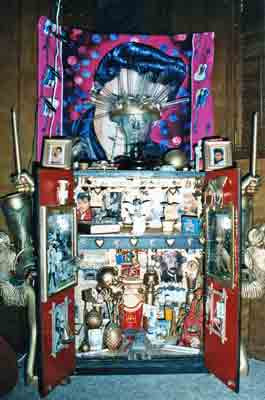 Many years ago I attended an art show at Seattle's Center of Contemporary Art. In it were several artist designed shrines. I couldn't afford to buy one of the work of art shrines so I decided to create my own. So I built the one stop worship shop and shrine to the King of Rock and Roll.

I bought an old cabinet at St. Vincent's and spray painted it black on the outside and gold on the inside. The top shelf was dedicated to Elvis. The bottom shelf contained symbols of everything we hold holy: cars, cigarettes, food, alchohol, sex, science and money. There were a few religious icons thrown in as well.

I placed the shrine on top of two carved kneeling camels I'd salvaged from an old bar I bought at an auction. They were originally from Thailand. I spray painted them gold.

I maintained the shrine for more than a decade. I'd add things to it every year when the Shopping Channel had their annual Elvis sales. It eventual expanded to pretty much the entire family room of my old house.

In retrospect, it was kind of an odd thing. Fortunately I was a bachelor and very few people ever saw it. The Elvis shrine was more or less dismantled and discarded just before Tess and I got married and combined households. The King may be the King, but love is love.

January 8th was Elvis' birthday. He would have been 72. I missed the birthday. Sorry Elvis. This would never have happened when I was Tim-Elvis. But Tim-Id is getting older and forgets things now and then. Elvis, however, is still the king and shrine or no shrine still deserves some recognition. Happy Belated Birthday Elvis! You rocked dude!
Posted by Time at 9:11 PM

Email ThisBlogThis!Share to TwitterShare to FacebookShare to Pinterest
Labels: Elvis

Love the Elvis Shrine! Thanks for another great share Tim. Long live the KING! :o)

Boy, you gave the Hairy Krishna's and the Catholics a run for their money with THAT level of devotion! Don't be surprised if the Vatican gives you a call when they see just how fervent you can be with tribute! :)

I won't be dismantling my Beatles shrine anytime soon......

I love it. everyone should build a shrine to their obsessions. within reason, of course...but an entire room? Now THAT is an obsession!

Gina, Ironically one of our local television stations is KING 5 and I work in King County. Coincidence? I think not.

THE Michael, I prefer to think of it as an ongoing art project.

Hayden, Art happens. I didn't set out to fill up the room with Elvis. But he is bigger than life even in death.

I don't particular like Elvis's music, but I like all the work you put into that shrine. Quite impressive that you ended up filling an entire room.

Anna, Ironically I don't particularily like all of his music either. And this was a long time ago. He merely fills a bookcase now.