Makes me want to scream 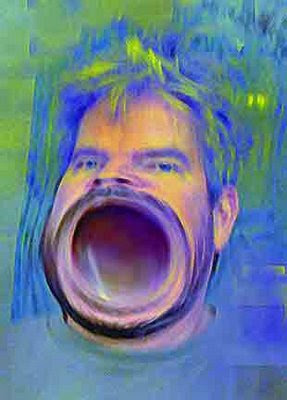 Around Halloween a year ago, I wrote a post called "I ain't afraid of no ghost." It was my typical tongue in cheek post about ghostly orbs in a photograph I took in Salt Lake City. I Photoshopped Brigham Young's face into the photo. It was obviously a fake. Today I got this anonymous comment on that post from some twit who had stumbled in via a Google search:

"this shit is FAKE!!!i went to scool at marchman tech,for commercial art and we did that crap all the time!!u guys are NUTSACKS"

First I hate anonymous comments. Second I hate the fact that people aren't required to take an IQ test before they are allowed on the Internet. Here was my reply to the twit:

"Dear Anonymous,
Really? Fake? You think so? You got me there. Who said cousins mating can't produce a freakin genius? And Marchman Tech must be one hell of a "scool" to have have trained such a sharp tool such as you.

But do me a favor. Next time you call someone a nutsack, at least have the balls not to remain anonymous you dimwitted ass."

I just wish the mental midget actually could find their way back to read the reply. But something tells me this piece of crap isn't smart enough to find his ass in the dark with both hands.
Posted by Time at 10:12 PM

I'd say the whole point of your posts was over his head, only he doens't seen to have one......

THE Michael,
Isn't the "scool" he refers to in Florida? That would explain a few things.

Don't you just love it when idiots come in after the fact and make ridiculous assumptions about you and your post? Your post was an obvious joke. Anyone who thinks you were serious... DAMN! You're right, he'll never find his way back to read your response.