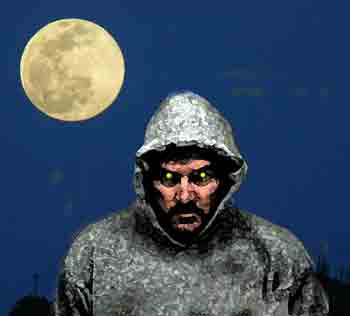 Another full moon. Once again I felt it before I saw the damned thing. I swear the gravity of it sucks all of the blood into my brain and aggitates the heck out of me. It seems logical, doesn't it? The moon causes the tides. Why wouldn't it have the same effect on my brain?

Great. That Kia commercial where they sing the song from the Sound of Music just came on. Now it is floating around in my moon sucked brain singing over and over again, "So long, fair well, aufweidersehen, good bye. Adieu, adieu, to you and you and you." Khaki wearing, car selling bastards! Make them stop!

Sorry. Ignore me. I'm not myself. It's the moon talking. I'll be fine tomorrow. The moon will wane. I'll be back to normal.

Whatever that is. How can anyone be normal in a world where something called El Nino is messing with the weather everywhere. I wouldn't be suprised if it starts raining bullfrogs and iquanas.

That would actually be kind of cool. It would be hard to clean up the driveway though. I wonder if the leaf sucker works on bullfrogs and iquanas.

Never use a leaf sucker on iguanas. Bullfrogs, maybe, they'll just squish in. Iguanas would break something, though, and THEN you know what you'd have.

Hayden, I'm impressed. You've lowered yourself to the pun level. My work here is done.

And you know they had to do some sort of casting for that damn Kia commercial. Can you image auditioning to prove yourself worthy of wearing khaki and dancing inepting around a car showroom? Oh the humanity.

Fleeing an opressive US government in a Kia - that's some wild imagery.

Back tyo normal?
Back to fucking normal?
Sorry I don't want you turning into some boring old fart who will give a detailed account on the sexual adventures of a slug with pictures to boot!.

That KIA commercial makes me bark at the moon. It could actually be used as an interrogation tool. "Tell us the truth or we'll play the KIA commercial again. Don't make us do it...we'll do it."

I haven't seen the commercial, but I happen to love the Sound of Music soundtrack - doesn't everyone?

Sounds like someone is having a bad day. I'd give Ya a hug, but think that now is NOT a good time.
Take care and enjoy your weekend best ya can.
;o)
~gina~

R. I'm not sure where you are getting that imagery, but yes that is.

Whitesnake, Once again, TMI, but I appreciate the sentiment.

Anna, If you love the Sound of Music, you would hate this commercial even more.

Gina, It was just temporary insanity. I'm back to my permenant insanity now. :)

tim id:
In "The Sound of Music" The Von Trapp family sang "So Long, Farewell" at the Salzburg music festival before immediately fleeing their Nazi controlled Austrian homeland.