Do you smell that? 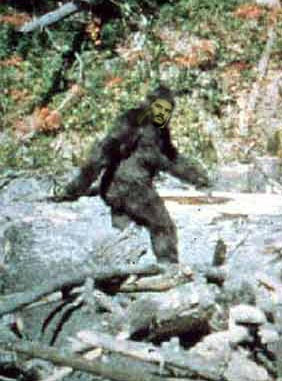 I was watching an episode of Weird Travels on the Travel Channel while I was working out on an elliptical machine at the gym yesterday. This episode was about Bigfoot. I was only catching maybe the last 15 minutes of the show but it was your usual guys trudging around in the woods setting up infrared cameras and to take pictures of Bigfoot and usually just snapping shots of squirrels and deer. But then they cut to a segment of these guys in Oklahoma tracking Bigfoot with the aid of a rather large Seminole Indian guide. The camera guy is filming the back of the guide and all of a sudden he stops and turns to camera, smiles and asks, "Do you smell that...do you smell that? The stink? That really bad stink?"

Okay, all I could think was the big guy farted and was enjoying gassing out the stupid white guys who probably paid him a bundle to shuffle around in the woods and pretend he was tracking a giant apelike creature. I don't know who was stupider, the guys filming the crap or me for watching it. Because all of these shows are the same. They build up a lot of drama about nothing, show you some grainy photos of what could be anything and waste an hour of your time without producing a single shred of evidence of anything. And adding insult to injury they film a fat guy farting and try to make you think they were showing you video footage of someone smelling Bigfoot.

I feel just as cheated by programs about UFOs, JFK conspiracy theories and the plethora of reality programs about haunted houses. You never see anything but bad video that looks like an outtake from the Blair Witch Project. I'm beginning to believe Bigfoot doesn't exist, there are no UFOs, Lee Harvey Oswald acted alone and ghosts are nothing more that dust on your camera lens.

Well pull my finger. That just stinks.
Posted by Time at 12:17 PM

I remember watching Bigfoot video as a kid and scoffing. The fact that nobody can find definative proof of ghosts, sea monsters or UFOs is why they have such appeal to me. A little unknown alive and well on earth keeps me humble.

Kat,
I actually would like to believe that all of these things exist. But I'm not sure what concrete proof there possibly could be. Even if Bigfoot appeared on Letterman, no one would believe it was real.