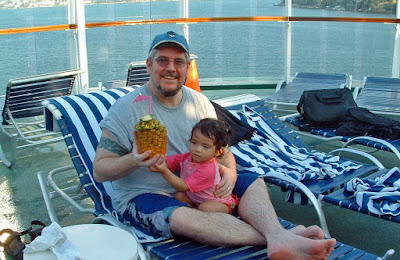 After an eight-day cruise with a toddler and my pregnant wife, you'd think I'd have lots to write about. But for the life of me, I just haven't felt like writing. I even checked out this book from the cruise ship library called Chicken Soup for the Writer's Soul. It was chock full of inspirational crap by writers that was supposed to inspire all of us failed writers to keep writing. All I could think reading it was that it is always easy to be inspirational when you are successful. Plus I kept getting distracted by Jerry Seinfeld's Bee Movie that was playing on the postage stamp sized television in our postage stamp "mini suite."

I even had my laptop with me on the cruise. But it cost 45 cents a minute to use the Internet, so I used that as a justification not to blog.

I find lots of excuses these days not to write...turning 50, becoming a father (twice in less than a year), the writer's strike (solidarity my brothers), clipping my fingernails, clipping my toenails, staring off into space...the usual things. Again, it isn't that I haven't got things to write about. After all, they teach you in those creative writing classes that you need to have experience to write about before you can write. And I have 50 years of experience now. Trouble is, I feel as though it has all been written about.

I also feel like complaining a lot. For example, I ordered a new camera online to take on the cruise. It was a Canon Rebel XT digital SLR. I was sick of my current digital camera's delay of about a second from between the time you pushed the shutter and the photo was captured. The Rebel is supposed to take four frames per second. This is especially crucial when you have small children you are trying to photograph.

Anyway, I ordered this camera from a place called Broadway Photo in New York. They had the cheapest price anywhere on the Web and I felt pretty smug that I was getting a bargain and not having to pay sales tax. I placed the order and then got this e-mail from them that I needed to contact their customer service department to confirm the order. I thought this was odd. I called and the "customer service" rep proceeded to confirm my order and hard sell me on a bunch of accessories that jacked the price up to almost double before I could get off the phone. I am the sucker PT Barnum was always talking about.

The camera arrived three days before the cruise along with all the crap I didn't really need to go with it. I charged the battery and popped it into the slick looking new camera. I popped off three shots and it stopped working. Broadway Photo doesn't deal with defective merchandise despite their "Complete Satisfaction Guarantee." They only take things back if you haven't opened or used them. Any problems with the actual product has to be dealt with by the manufacturer. I had to pay $17.70 to ship the stupid camera to Canon for a warranty repair the day after I got it. Needless to say I didn't have it for the cruise. And Broadway Photo (may they experience jock itch for eternity) never even responded to any of my complaints.

But I digress. The cruise itself was my 16th cruise. It was my third on Norweigan Cruise Lines. And I have to say it was one of the worst cruises I've ever been on (the second worst cruise I had ever been on was my second cruise on Norweigan). Oh, the ports were fine and the weather was great. But it was the worst food I've ever had on a cruise ship. I had better food when I was in college living in a dorm.

As I mentioned, the cabin was miniscule even though it was billed as a suite. The bed was like sleeping on the floor. And Norweigan Cruise Lines wins the prize for the most expensive drinks and figuring out every way possible to get as much money out of you as possible once you are on board. I am suprised they didn't charge for toilet paper. They do provide complimentary hand sanitizer throughout the ship (including the elevators). Even my daughter began holding out her hands everytime we passed one of the dispensers. She still got sick (which led to a $142 charge to visit the ship's doctor).

Norweigan is extremely proud of their "Freestyle Cruising." Their marketing hype says this means you can do anything you want when you want. In actuality it means you spend a lot of time in line waiting to eat, get off the ship and do just about anything because nothing is organized. It should be called "Chaotic Cruising Without Any Semblance of Class." Even the formal night is optional. I was one of about three guys (not counting the waiters in the main dining room) wearing a tux.

Freestyle Cruising attracts freestyle cruisers. I've never seen so many guys in shorts wearing black socks with sandals in my life. And these same guys are also carrying around buckets of beer shaped like football helmets so they can get six beers for the price of five (and a free baseball hat or Red Stripe t-shirt). It was about 50 degrees out the last day of the cruise when we were sailing back to Los Angeles and these guys were walking around with their buckets of beer at 10 a.m. waiting for the grill to open up on deck so they could chuck down some dogs and burgers.

But I digress. I really don't feel like writing.
Posted by Time at 8:21 PM

I'm so glad you didn't feel like writing Tim because I didn't really feel like reading either :)

Sorry to hear that your cruise was such a bust. Despite my epic fear of the ocean I love cruises but will make a note never to sail on Norweigan cruise lines. I went on a Russian ship when I was 19 and lived on toasted sandwiches from the bar as the food was inedible (and I'll eat virtually anything put in front of me). Other than near starvation I had a ball but then I was hanging out with a football team *giggle*.

Loved the pic of you and EM.

Gypsy,
Oh the cruise was just a cruise. After being on so many of them I'm not sure what I expected to be different. EM was after the little parasol from my drink That's the only reason I bought the thing. :)

Wow. Paying all that money to go on a cruise just so you can carry around buckets of beer and act like you're at a tailgate party. Shit. I can do that at home, with more and better beer and I don't have to wait for 10:00 to roll around to grill some mystery meat.

Sometimes it's okay not to want to write. When I get nosebleeds I imagine myself collecting some of the drippings and finger writing "I Feel Pretty, Oh So Pretty!" on our sliding glass doors. But... Meh. It has been done before and no one would notice except my wife who would force me to clean it up.

R. I learned a long time ago not to listen to the voices in my head, especially when they tell me to write things in blood on the sliding glass door.

Can I send R to live with you when he gets these ideas in his head?