Daddy Dearest or being a papa isn't always pretty 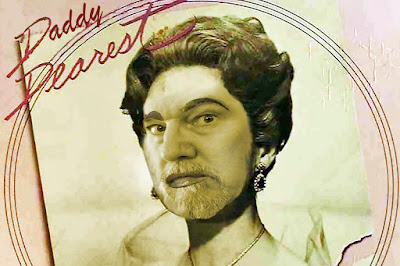 Okay, disturbing as this image is, I just use it to spoof on another of my roles in life (and for me, late in life) -- being a father. The Internet being what it is, I won't share too much information here about my children or show photos. Suffice it to say I married late in life and had children when most people my age were anticipating being grandparents.

There are pros and cons for being an older parent. On the pro side, I've just about exhausted all those things that distract you in your 20s and 30s. My career is established and doesn't monopolize my time. And I make an okay salary and have excellent benefits. That is definitely a plus if you are going to have kids. My patience level is also much better than it was when I was younger.

The cons: helping out at one of my kid's classrooms and being referred to as "that grandpa dude." I also dread going to curriculum nights and being the oldest person in the room by at least 20 years. In addition, although I'm in fairly good shape, it still is a challenge physically to keep up with young children.


Am I a good father? I try. But children don't come with instructions and being a parent takes lots of practice and energy. The biggest lesson I learned was not assuming my children were just mini-me's of me. They have distinct personalities and quirks like everyone else.

I do make every effort to let my children know I love them and always will. I never want them to grow up with any of the insecurities I had about not being good enough.

I also try to make sure my children have everything they need if not everything they want (though we sometimes go overboard on that front). I have taken my family on many vacations that have included trips to Mexico, Disneyland, Sea World, Legoland and Graceland (that was more for me). I've also taken them camping even though I got more than my fair share of camping as a kid and didn't visit any of the places I've mentioned. The irony is, that since we traveled a great deal when they were younger, they don't actually remember much about those vacations.

Although I would probably be better off financially if I hadn't become a parent, I would have missed out on something that has, I think, made me a better person. Becoming a father is the best thing I ever did in my life.

It may ultimately lead to my early demise, but I wouldn't change being a father for anything.
Posted by Time at 8:00 AM