Dust in the wind (or space) 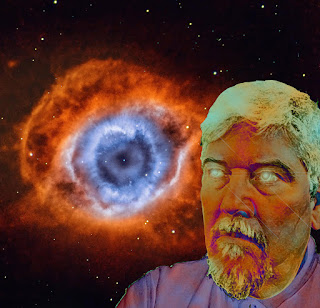 neb·u·la : ASTRONOMY a cloud of gas and dust in outer space, visible in the night sky either as an indistinct bright patch or as a dark silhouette against other luminous matter.

Sometimes a cigar is just a cigar
--Sigmund Freud (perhaps)

Unlike most of my blog posts, this one began with me messing around in Photoshop and creating an image of me staring into a nebula that looks quite a bit like a giant eyeball. I had no motivation to do this other than my love of Photoshop and its filters. I liked the image so much that I had to post it and now I need to come up with some text that somehow gives it some cosmic meaning.

But if the image is art, I shouldn't have to explain it. Because one thing I've learned from artists over the years is that sometimes they don't have a clue as to what their work is supposed to mean. They rarely admit it, however.

Does everything have to mean something, though? Is there really any cosmic significance behind the Mona Lisa's smile? Even Starry, Starry Night was likely just a schizophreniac's view of a night sky.

Not that I don't fall into the trap of trying to find meaning in things. Though I hate platitudes like, "Everything happens for a reason." Does it really? Maybe Popeye's sold out of its new chicken sandwich because of the hype not because they are miraculously good sandwiches.

I will likely never no. I have never tried a Krispy Kreme doughnut, either. Being in marketing has taught me not to get too caught up in persuasive messaging.

Though I do think it is human nature to try and find meaning in things, particularly their own lives. It is easy, however, to get too caught up in that tail chasing exercise. Perhaps this is why the super computer in Douglas Adam's Hitchhiker's Guide to the Galaxy answered the question, "What is the meaning of life?" with "42." When questioned further about the answer it responded that people were just not asking the right question.

I can't answer for Douglas Adam's as to where the number 42 came from as the meaning of life. But I do find it interesting that both Elvis and his mother died at aged 42. Jackie Robinson's jersey number was 42. In Egyptian mythology, there are 42 questions asked of a person making their journey through death. The Gutenberg Bible is also known as the "42-line Bible", as the book contained 42 lines per page. There are 42 gallons in a barrel of oil. The Orion Nebula is also known as Messier object M42,

If that doesn't have some cosmic significance, I don't know what does.