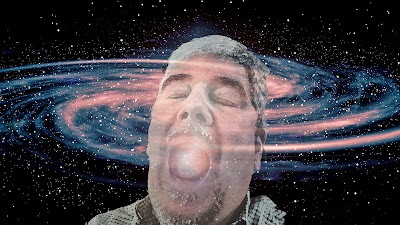 The term Milky Way is a translation of the Latin via lactea, from the Greek γαλαξίας κύκλος (galaxías kýklos, "milky circle"). From Earth, the Milky Way appears as a band because its disk-shaped structure is viewed from within.
--Google

The Milky Way bar is a chocolate-covered confectionery bar manufactured and distributed by the Mars confectionery company. Introduced in 1923, the Milky Way bar's American version is made of nougat topped with caramel and covered with milk chocolate, similar to the Mars bar sold outside of the U.S.
--Wikipedia

I don't know about you, but I find it ironic that the Milky Way bar is manufactured by the Mars Company, especially because if you eat too many Milky Way bars you won't have a heavenly body. 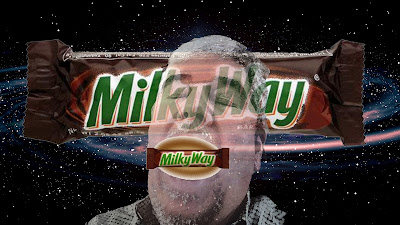 I was never really a fan of Milky Way bars though. I'm just not into nougat. Because what the heck is nougat anyway. Okay, it's sugar, egg whites with an occasional nut thrown into the mix. And it doesn't really have anything to to with Milky Way, the galaxy.

That's far out...literally. Makes sending a person to the moon seem like a stroll around the block.

I've mentioned one too many times laying on my back on a camping trip staring up at the stars and marveling at the shear number of them. Is it little wonder mankind dreams of a heaven that is in the stars and a hell that is here on earth (or below it...though you already know I think black holes are where hell is at).

But not once when I was a kid laying on my back staring up at the Milky Way did I think about the candy bar. Or at least not about that candy bar.