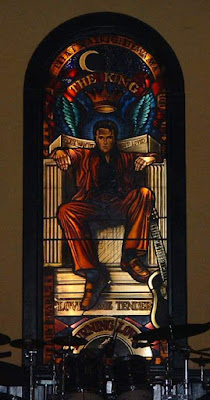 As is my habit when I travel, I look for Elvis. And I don't mean the Elvis that shows up in 7-11's and hitchhikes everywhere. I look for his image. The one place you can bet you'll always find Elvis is a Hard Rock Cafe. And sure enough in the Hard Rock in Puerta Vallarta, there he was shining down on me.

I find great comfort in that (and the shooter in the Hard Rock shotglass I always have to have to add to my collection).

So when CBS, the network giant whose symbol is a giant eye, announced that they are showcasing a brand new mini-series about Elvis, I once again know that Elvis has given me a sign that he watches over everything and everyone.

What really clinches that fact that the King is once again presenting me with signs is the contest CBS is holding to promote the mini-series. They are, get this, giving away a lovely set of ceramic poodle dogs that decorated the set of the mini-series. These aren't just any poodle dogs either. They are SIGNED by Camryn Manheim, the actress that plays Elvis' mother in the mini-series. Well, I have to have these, so don't even think about entering the contest. Because there is nothing more I need as I try and consolidate two households after my recent marriage, than four ugly ceramic poodles signed by Camryn Manheim (who also once appeared in Scary Movie 3). God knows Tess will understand the importance of ceramic poodles that appeared in the Elvis mini-series.

What is earthshattering about this new Elvis mini-series appearing May 8 at 9 p.m. ET/PT and May 11 at 8 p.m. ET/PT only on CBS, is that it proclaims to be "fact-based." Well smack my ass and call me Sally, it is about time we got to see some fact-based information on Elvis. Because I'm looking to learn something I haven't been able to glean out of the 50 some books I've got that have just about scab-picked to death every aspect of his life (and death).

But what I'm really looking forward to is Randy Quade as Colonel Tom Parker. I guess his role in National Lampoon's Vegas Vacation (a fact they leave out in his bio on the CBS Web site) has prepared him for this important role.

Oh, I suppose I should say something about Johnathan Rhys Meyers who plays Elvis in the mini-series. Okay, he looks kind of like the King, but good luck with the rest of his career. He's gone from Bend it like Bendham to playing Elvis in a made for television mini-series. I'm afraid he's destinied to someday be sitting in a room shooting out his television with a .357 shouting, "I played the King, man."

And what can you say about Antonia Bernath as Priscilla? Apparently her biggest film credit was Kisna, the Warrior Poet, so what did she have to lose by play Priscilla?

Oh, I know, you are saying that Tim-Elvis is just being a nattering naybob of negativity again. But something tells me this is just another attempt to rekindle interest in the King with a generation who thinks he is a myth like the Easter Bunny. I mean, as the rabid Elvis fans get older and older and have less money to purchase Elvis Presley Enterprize-authorized TV trays, the marketing people have got to be looking at ways to increase the percentage of market share in the younger demographics.

But I have news for you, a mini-series on CBS isn't the answer. You want to light a fire under potential new Elvis fans, you have to get on cable. HBO needs to launch a mini-series on par with Deadwood and the Sopranos...maybe something like, Untold King or Real Elvis or Memphis Mafioso. You produce a real, "fact-based" program on the King that doesn't have to be censored or interspersed with Toyota ads and you will create a whole new generation of Elvis fans.

Now that would be taking care of business and something I'd TIVO for sure.
Posted by Time at 3:50 PM