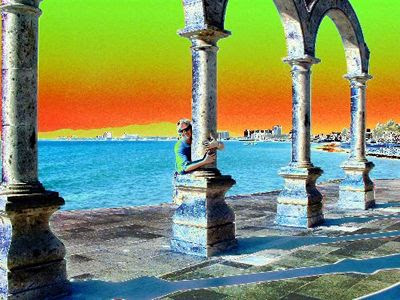 There is just something about taking an ordinary snapshot, running it through some filters in a digital photo editing program that fascinates me. It makes an image of me hugging an arch in Puerto Vallarta very surreal.

Actually, just the whole world of digital photography fascinates me. On our recent honeymoon, I must have snapped 300 images with my digital cameras. Not only do I avoid about $75 in printing bad snapshots, I can manipulate bad shots into something at least I think are interesting. And on a morbid, but practical point, when I die, all they have to do is toss out some CDs instead of boxes of old photos that no one but me cared about.

Though I am kind of fascinated by old photos, too. When my dad died, I rescued some albums of photos from his Navy days in World War II. They were random shots of his ship passing through the Panama Canal and photos of him with Navy buddies and a few women I assume were old girlfriends. Now, my mom would have simply tossed the photo albums saying that they were of people we didn't know and thus weren't important. I totally disagree. They meant something to my dad. They were his memories. Since I never got to ask him about the people in the photos, I simply fill in the gaps with my very active imagination.

Think how fortunate we are to live in a generation where there is a photo record of everything. Think of past generations of people who only knew the names of the president but never knew what he looked like...okay, bad example.

But aren't you ever curious what famous figures throughout history actually looked like? To get slightly controversial, take Jesus. There is no record of what he looked like yet we all conjure up images of a bearded white man. Why? Because painters throughout history painted Jesus to look like their contemporaries. It's the same reason why Biblical quotes always have "thee's" and "thou's." The most popular translation of the Bible was done during King Jame's reign in England and translated into their venacular. It never ceases to amaze me that many Americans actually believe they spoke English in Biblical times.

Even Mel Gibson hung onto the image of Jesus as a white man in his mega movie. He was obsessed with realism in every other aspect of the film, including having them speak the ancient tongue of the time and depicting violent scenes of crucifiction none of us could even have imaged back in the old 1940s and 50s films depicting Jesus, yet Gibson makes Jesus a white, bearded man. Go figure.

I used to fantasize about a timemachine that could be sent back and photograph great moments throughout history. But would we accept them?

Meanwhile, we have instant images of everything. But even as I marvel at our technology, I must go back to the original point (?) of this particular blog entry: with our increased abilility to document everything comes an equally sophisticated ability to doctor the images to match our expectations.

And when I hug arches, it is always in a very surreal world.

Coming from a extreme religious cult, my church would form new doctrine on one quote from the Bible. Hel..l..o...o...!!! The Bible was not originally written in English. They can't imagine that there may be something lost in the translation.

The whole thing facinates me as an adult.
Thank God I'm an athiest!

If there isn't already a bumpersticker out there with "Thank God I'm an Athiest!" you should market that one!