Old man and the sea 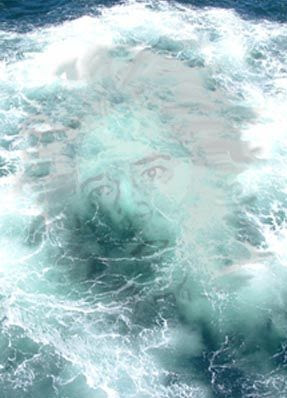 I grew up surrounded by sagebrush desert. The largest body of water I ever saw as a kid was Lucky Peak Reservoir outside of Boise. It ebbed and filled as they opened and closed a dam on the Boise River. It was really nothing impressive as bodies of water go, but to me it was the ocean I only knew about from educational films in school.

Many summer Sunday afternoons were spent at Lucky Peak. For the longest time I thought Luck Peak was named after the first family dog I remember -- Lucky. Lucky was a golden retriever. Lucky developed a habit of biting strangers (including me soon after I was born). So one day a man in a truck came and took Lucky away to the proverbial farm parents always send errant pets to. So Lucky apparently wasn't.

Our trips to Lucky Peak were always to the same "secret" spot my father had found to fish without competition. Not that competition mattered. The only fish in Lucky Peak were trash fish -- squawfish and carp. But that didn't stop my father from teaching us how to cast our lines and watch the bobbers until we got a bite and then haul in the bounty that we would then quickly dispatch, gut and look for tapeworms to bait the next hook.

Dad's secret spot at Lucky Peak involved parking in a gravel turnout and winding our way down a small path worn through the sagebrush (alert to my mother's neverending warnings about ticks and rattlesnakes) to the edge of the reservoir. The edge of reservoir varied according to the whims of the people who controlled the dam. Sometimes the water came up to the edge of the sagebrush and sandstone. Other times it was low and you'd have to made your way down endless sandy terraces that looked like something the Incas would build in the Andes in Peru.

I liked it when the water was low. My brothers and I would spend hours gathering driftwood and looking for old lead sinkers from fishing lines snagged on old tree trunks. Then we'd float around on inner tubes and listen to Dad cuss as pulled in yet another carp.

For the longest time I thought Lucky Peak must somehow be part of the sea. Since the Boise River would eventually flow into other rivers which eventually make it to the ocean, I suppose it technically was.

Years later, I finally saw the real ocean and stood in awe at how it stretched infinitely into the horizon. I felt its pull on me and knew that Lucky Peak had only been a space saver in my young life until I could return to the water.

I suppose that is why I was born a Pisces.
Posted by Time at 3:43 PM

That was a great story. I hope it continues.

My favorite thing to do at Lucky Peak was to secret marshmallows from my dad's tackle box. I'd find an anthill then place the marshmallows in different locations around it. Then I'd wait nearby and observe how the ants discovered the "bait" and how the ants would disassemble the white puffs of sugar and gelatin and take them back to their home in the hill.