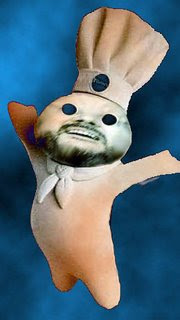 Our television is full of demonic icons conjured up by ad executives to prey upon our fears in order to sell products. Pop N' Fresh, the Pillsbury Dough Boy for instance. What is he other than a terrorist with a chef's hat. There he is with his pasty face, blackhole eyes and bloated body, leering at you while you try and open an explosive pipebomb of biscuit dough. What's not to be afraid of?

Or take the "Jolly" Green Giant and his little imp "Sprout." Isn't he just the flesh eating ogre from the Jack and the Beanstock story? And Mr. Clean is a defrocked genie who dresses like an orderly in a mental hospital, spraying disinfectant on everything. Perhaps he is in league with the Coo-Coo for Cocoa Puffs bird.

The list goes on. There's the sinister leprechaun taunting you from a cereal box, "Orange moons, yellow stars, they're all after me luck charms..." Can we say, "WITCHCRAFT!" I'm sure he hangs around with his buddies Snap, Crackle and Pop or the Keebler elves casting spells.

The Geico Gecko slithers around talking in a Cockney accent like a slimy Artful Dodger from Dickens. He might as well be tempting us with an apple. Can we say, "THE DEVIL!"

I'm here to say, "RESIST!" Get TIVO. Fast forward through the spew that is speaking in tongues through your plasma screen before it's too late.

Do it before midnight tonight...my god what am I saying...argggggggggggggg....
Posted by Time at 8:25 PM

You have proved once again that with a little thought and photoshop, you can turn an idea into a fabulous post.

I'm still trembling a bit at the sight of the Pillsbury Dough Boy. The freudian thing didn't occur to me until you mentioned it. Several others brought it up as well. You guys are on to something.

Shandi, What can I say? You are a major inspiration. If the monkey wasn't already my muse, I'd offer you the job :)

I do agree that commercials are like the devil, but I rather like being tempted daily because it keeps me on my toes. I do fear that one day I will give in to the temptation and end up buying a product that I do not like just because a cartoon told me to.

I'm digging your blog masthead. It's a bummer someone took a bite out of the family photo though.

And WHAT may I ask is bad about SPELLS? HUH? Maybe those little bastards are casting a wish that you give up sugary junk food and eat a healthy breakfast for once........

Michael, Nothing is wrong with spells. I can see you're having one of yours right now :)

okay, that picture is one for the scrapbook. As someone once told me, "You've taken 'wrong' to a whole new level."

Kristy, Does this mean I get my own sock monkey? :)

Funny you should ask that, Tim. In fact, I ordered up a new batch of red-heel socks and am designing a sock monkey for you even as we speak. It's on honor bestowed on few...

Kristy, I'm assuming that is your way of telling me to put a sock in it. :)

Very nice blog!
Visit my page:www-franco.blogspot.com
it pays well,
see the video
it dependens on you!