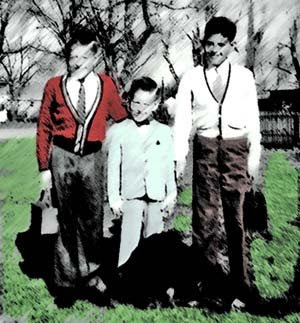 I first sensed that life wouldn't be fair when my mother started sending us to Sunday School. It wasn't so bad before I started attending regular school, but once I started getting up early every day to educate my mind, I wasn't too thrilled to be forced to get out of bed on a Sunday morning to educate my soul.

A Christian Science church doesn't have much to occupy a kid. They are pretty plain. There isn't much decoration except for Bible quotes on the walls. They aren't like a Catholic church where you can at least get caught up in the spectacle of it all. They don't even have preachers or priests. They have readers . So you sit there while a couple of people read out of the Bible and the Science and Health with Key to the Scriptures by Mary Baker Eddy.

It was a little bit better when we would break off into groups based on our ages. We'd go off to separate rooms and talk about what the reader's had read during the service. The only thing worse than listening to the readers at church was talking about it.

My other problem with Sunday School was when I started applying the cognitive reasoning I was learning in regular school, I was having a real hard time buying the bill of goods they were trying to make me believe based on faith alone. I began asking the Sunday School teachers questions like, "If god created everything and everything he created was good, where did evil come from?" I don't even remember the answer, but I know it never satisfied me.

Christian Scientists don't really believe in a devil per se. When you were sick or tempted to do something wrong, it was an "Error in thinking." When I would tell my mother I wasn't feeling well, she would tell me that that was "error" speaking. For years I thought she was saying "air." And I formed this image of the devil being made out of dark smoke or air.

I finally stopped going to Sunday School when I was 16 years old. I had a girlfriend by then and she was concerned that, being a Christian Scientist, I wouldn't go to a doctor if something was seriously wrong with me. It was just the excuse I needed to finally tell my mother I didn't want to go to Sunday School anymore. She was very disappointed. My brother's had given it up long before me. I had been her last hope of having a good Christian Scientist son.

I think being a Christian Scientist did help me learn how powerful our minds are when it comes to dealing with illness. But I honestly never missed being part of an organized religion. And to this day I sleep in on Sunday's and enjoy every minute of it.

And as I wrap up this post and try to post it, it keeps giving me error messages.

Or they could be air messages. It makes me wonder. 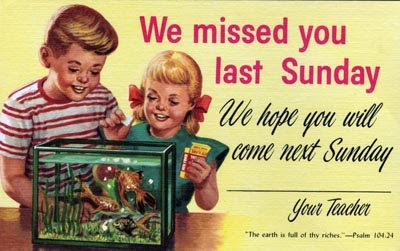 Interestingly enough I was just thinking about Christian Scientists. My conclusion is that if you want some decent genetic stock to start a colony on Mars you should get some multi-generational Christian Scientists since the people with life threatening genetic diseases would have died due to lack of modern medical care. Not to mention the whole mind over matter thing.

I was raised to believe that you didn't say you were ill because the devil could hear you and would then have the authority to make you ill. It was called, "speaking negativity into existence". Snot could be gushing out of your nose, and you could be puking your guts out but... you sure as hell don't say you're sick. Better to say, "I think I'm coming down with a healing."

I admire the Amish for at least leaving it up to the kids whether to accept their faith or not when they are older, although I think they play dirty pool by thrusting them into the worst that secular life has to offer, ie drinking, drugs, sex, all far in excess of what the average kid gets into.

Shandi, I think you had the makings for a very good Christian Scientist. I had a similar experience coming down with a healing for a dislocated shoulder in 8th grade.

Miss Bliss, I find that odd, too.

THE Michael, You lost me when it came to referring to sex, drugs and drinking as the worst part of secular life.