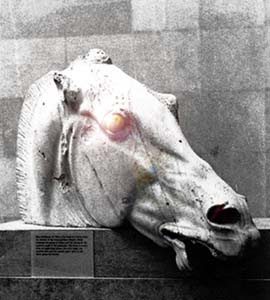 "The Púca (also Pooka, Phooka, Phouka, Púka) is an adroit shape changer, capable of assuming a variety of terrifying forms. It may appear as an eagle or as a large black goat (its name is a cognate of the early Irish 'poc', 'a male goat' and it lends its name to Puck, the goat-footed satyr made famous in Shakespeare's A Midsummer Night's Dream), but it most commonly takes the form of a sleek black or white horse with a flowing mane and glowing yellow eyes. "
--Wikipedia

polka n 1: music performed for dancing the polka 2: a Bohemian dance with 3 steps and a hop in fast time
--Webster's Revised Unabridged Dictionary (1913)

"Well, I've wrestled with reality for 35 years, Doctor, and I'm happy to state I finally won out over it."
--Elwood P. Dowd, Harvey

I didn't really know much about Pookas before I started writing this post. I first heard about the Pooka when I watched the movie Harvey years ago. It starred James Stewart as Elwood P. Dowd. Elwood P. Dowd's best friend was a Pooka. This Pooka, however, took the form of a six foot three giant rabbit named Harvey. Harvey hung out in bars, drank and basically was harmless.

The Pookas from Celtic mythology apparently weren't quite as benign. Wikipedia goes on to describe the Pooka as "...the most terrifying of all faery creatures. One reason for this is its appearance, but its powers are also feared. It is said to waylay travellers and others about at night, and if it is able to toss them onto its back, it will, at very least, provide them with the ride of their lives, from which they will return forever changed. "

I think it would be fun to take a ride on a Pooka and return forever changed. But those supernatural kinds of adventures never really happen to me. The closest thing I get is to ride the train every day to and from work. It beats riding a bus, but I don't feel forever changed.

I do have a couple of Puka shell chokers from the 70s. I can also honestly say I have never danced a Polka. But I digress.

The thing I liked about Elwood P. Dowd's Pooka Harvey was that he was a jovial kind of creature that one would really like to hang around bars with. I imagine the author of the screenplay made Harvey a giant rabbit instead of the traditional Pooka was that having a white horse with blazing yellow eyes hanging out with you in a bars would seem kind of weird. Plus there is the issue of the massive amount of manure horses produce. A giant rabbit is much more manageable.

Watching the movie or the play, one never quite knew whether Harvey was a hallucination brought on by Elwood's drinking or a real spirit only he could see. I pretty much think this is the case with most mystical creatures. You never really see them, but you can't quite bring yourself to dismiss them altogether. Because you never really know. Just because you can't see something, doesn't mean it isn't there.

You can't (except in parts of Southern California). I rest my case.
Posted by Time at 10:08 PM

Weird, but brilliant! You put a smile on my face, Tim. I think, in lieu of a pooka, you should just regress a bit and get yourself a good old-fashioned imaginary friend. And if you do, I expect to hear all about him/her/it! cheers, JP

After my mom picked us up at the train station on our last visit, the kids told her that we saw the movie "R.V." during the ride down.

"Harvey?" mom asked. "I loved that movie. The big rabbit. And Jimmy Stewart!"

"Well, it was a remake. Instead of Jimmy Stewart it had Robin Williams." (That's me admitting partial defeat).

"Robin Williams? Who's she?" mom asked.

Any movie that can't be suplanted in our parents' memory has got to be a classic by definition. Harvey definitely qualifies.

JP,
"Weird, but brilliant" is probably one of the nicest things anyone has said to me. Thanks. But I tend to think all of my friends are already imaginary.

Kristy,
RV and Harvey are essentially the same movie, just with different plots, actors and endings.

Michael, I've always thought of you as my imaginary friend.

C'mon now tim. No one,not even you, has a good enough imagination to come up with the michael.

I first saw Harvey when I was quite young, and have wanted a Pooka ever since. Most of the movie escaped me at that age - all I talked about for weeks was how I might find a giant invisible rabbit to have as a pal.

The idea that there might not be one never occurred to me; how to find an invisible rabbit absorbed me completely.

Lights, You have a point there.